Maud Webster summarises the lively debate between the four Editor of the Courier candidates, George, Joe, Tom and Dom

Four candidates are up for Editor of the Courier: Music sub-editor and NSR Station Manager Dominic Lee; Head of Digital & Design George Boatfield; Head of Current Affairs Joe Molander; and Head of Sport Tom Moorcroft. If you're involved in student media, the debate is well worth a watch and may help make up your mind as to who to support (or, make you feel even more conflicted).

Alternatively, see below for a 'brief' summary.

Moderator Daniel Janicki notes that none of the candidate's manifestos offer adjustments for COVID, and asks which policies candidates will have to change should this still have an impact next academic year.

Dom doesn't feel there's anything specifically restricted; he gives the example of the speed dating policy on his campaign references can be done online through Zoom, and that the societies & media pullout can be adapted into an online article rather than a physical publication. George references existing infrastructure in place such as the Windows Virtual Desktop, and notes that one of his manifesto points, student media afternoons, can be held and accessed on a discord server. Suggests it's very similar to how things have had to adapt already. Joe agrees that The Courier has already had to make adaptions, and notes that the reason no candidate may have mentioned it on their manifesto is because a manifesto is what you wish to change - there's very little to be changed as The Courier already follows good protocol. The only change of his manifesto he anticipates would be for workshops, which could easily be done on Zoom. George adds onto this point by noting that often hosting events online can lead to more prestigious or qualified attendees and workshop leaders attending. Tom acknowledges that the transition from office life to online working has been tricky, but says that it's made us realise that we "don't have to rely on print to get great articles out to our readers" and notes he would look into utilising online platforms more even post-COVID.

The moderator poses a question to George: do you feel that by extending your role to encompass student media may encroach on the roles of NUTV and NSR execs?

George argues that as the editor controls budget (which he wants to redistribute) and that the role is bigger than just the Courier, it would be appropriate. Moderator Daniel then asks if this would meant there would need to be a Courier exec? George replies that no, there's already a team of senior editors. Dom then interjects that it may be more pertinent to see the role as more of a support role rather than something to be in charge of. George counters with: is every Sabb role not a support role? When asked his opinion on this contentious topic, Joe explains he wishes to offer support to NSR and NUTV, including offering NUTV an office and resolving similar issues. He notes he will be there if NSR or NUTV wishes to collaborate with the Courier, and will always be there to support. Tom finishes this question by emphasising that in the role of Editor of the Courier, NSR and NUTV concerns won't be ignored and that it's important for every branch of student media to be represented.

Between 31:57 and 41:00 the candidates discuss representation, and I'd recommend watching this even if you want to skip the rest of the debate. Moderator Daniel presses candidates on their policies relating to representation and encouraging diverse voices in student media, including Dom's marginalised students columns.

Closing statements from all candidates:

Joe Molander: "Last year, I'd stay in the office until the small hours of the morning, because I wanted it to be the best it can be, and I Still do. We already do so much good work, and I want to do more good work, which gets read by more students. I think it's more important than ever before that students have a voice, and if you vote me for number one, I think we can make that voice more assertive than ever."

George Boatfield: "I hope my passion for student has been clear to you all over the course of this evening, and you can see it across my campaign, it really matters to me. Which is why I don't want to stop with student media when my degree ends. [...] My degree has trained me for this job, as have my extra-curricular projects, and I know that I'm ready for it."

Tom Moorcroft: "The Courier has been such a huge part of my life and having the opportunity to represent it at the highest level is something that I really wouldn't take lightly. So I think Thomas Moorcroft is the student who I hope you've seen will eat spicy wings for his campaign video, to show just how much he's willing to do to get your vote. Tom's the kind of guy who puts himself out there, goes out of his comfort zone to advertise himself to Newcastle students. I've come a long way through this campaign, and if I get made the editor of The Courier, The Courier will come a long way too."

All candidates also thank Daniel for moderating, Ella for her support, student media for hosting, and their fellow candidates.

You can watch the debate yourself through the recorded livestream below, and find George Boatfield, Joe Molander, Tom Moorcroft and Dom Lee's manifestos on the NUSU website. Additionally, all four candidates can be contacted on Instagram (GB, JM, TM, DL) or Facebook (GB, JM, TM, DL) if you have any queries about their campaign or manifesto!

Voting opens on the 1st March, closes on 4th March, and 50p per voter will also be donated and split between three charities.

AUTHOR: Maud Webster
(She / Her) Second-year Architecture & Planning student at Newcastle University, and arts sub-editor for the 20/21 academic year. 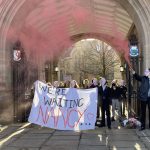 No Confidence in Chris Day? 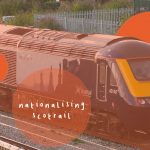 ScotRail to be nationalised

Should we ‘bee’ banning pollinator-harming pesticides?

What arty events are going on in M-ART-ch? 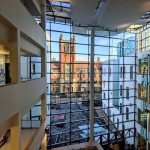 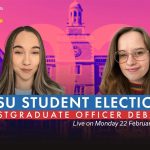