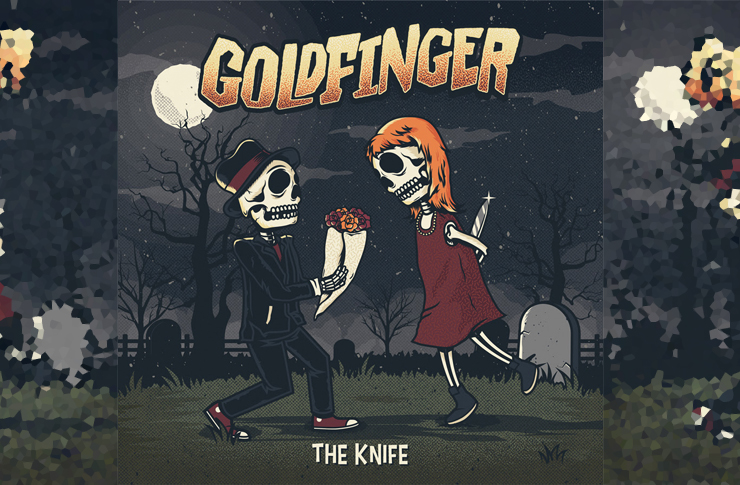 Bloody hell, this wasn’t a name I was expecting to see again: Goldfinger, skate and ska-punk band from California! They have songs like ‘Fuck You and Your Cat’ and ‘Handjobs for Jesus’. And yes, they also wrote the songs ‘Superman’ and ‘Spokesman’, both of which appeared in the Tony Hawk games.

Ok, so this new album. Their first in nine years… and on the surface, it’s perfectly good Goldfinger greatness. Songs like ‘Get What I Need’ and ‘Who’s Laughing Now’ bring out the classic ska-punk tones we all know and love from previous Goldfinger albums, while pop-punk elements comprises the largest chunk of the album, giving strong Blink-182 vibes throughout (but more on that later).

Having a change of style midway through a Goldfinger album is weirdly traditional, but it’s usually a thrash metal song, not some kind of synth-ska affair.

While none of it is particularly groundbreaking in any way, it’s still a good, solid album. However, there are some ideas that just don’t work too well, such as the chorus in ‘Milla’ where the weird, rumba-like rhythm sends it to a grounding halt. ‘Don’t Let Me Go’ sounds completely out of place amongst all the other songs; having a change of style midway through a Goldfinger album is weirdly traditional, but it’s usually a thrash metal song, not some kind of synth-ska affair.

So about that Blink-182 influence. Beginning with a breakdown, ‘Am I Deaf’ is really, really, pop-punk. John Feldmann has been working with Blink-182 to produce Blink’s latest album, California. But now he’s got half of Blink to perform in The Knife, including Mark Hoppus singing on ‘See You Around’. Former Goldfinger drummer Darrin Pfieffer didn’t seem too pleased on Twitter.

Overall, this is an encouraging new start for Goldfinger, who really went downhill after Open Your Eyes. Now we just need to wait to see if it keeps the ska that it ditched in 2002, or just become Blink-18Finger.

A Love Letter to… Gabber