Last weekend the Newcastle Basketball Club dusted off their boots after finishing their season in mid-March.

For one more day of play during the 2017-2018 season, Team Newcastle suited up against the Newcastle Basketball Club alumni, as ex-Knights (both men and women), returned to the Toon for a weekend full of basketball (and possibly some booze).

Both games featured spirited efforts, as players came from all over the UK to relive their sporting glory days in an old school vs. new school faceoff. Taking place on 21 April, the afternoon featured a rollercoaster of emotions as the current Newcastle team came away with a victory, and the current men’s team were defeated in dramatic fashion.

Newcastle University Women’s Basketball Club handled the alumni squad, called the Old Girls, by a final score of 60-50. Despite being out of university competition for a few years, the Old Girls put up a strong effort against the Club’s current players.

[pullquote]During each quarter, Team Newcastle would take a commanding lead against the Old Girls, but they never gave up[/pullquote]

As the game progressed, it was evident that the game would feature runs from both sides. During each quarter, Team Newcastle would take a commanding lead against the Old Girls, but they never gave up.

The Old Girls came firing back with stingy defence and a quick moving offence to tighten the score many times in the game. Standouts from the Old Girls squad included Ashley Todd, Alice Holloway Corinne Vaughan and Jackie Fisher. Sophie Short, Cassidy Sanders-Curry and Courtney Strait led the charge for the current players’ team, who’s offensive attack was too much for the Old Girls to handle when the final buzzer sounded.

On the other side of the Newcastle Sport Centre, the Old Boys completed an amazing upset against the current Newcastle Knights men’s team.

With the game tied at 62, the Old Boys took the ball up the court for a desperation heave. The ball clanged off the rim, and it seemed that the game was headed into overtime. One player on the Old Boys’ team had other ideas, though, and scampered to the loose ball, grabbed the rebound and put up a skying, fade-away hook shot that danced around every part of the rim before dropping in for the winning basket. Bedlam ensued, as the red-kitted Old Boys swarmed the shooter and celebrated accordingly.

For the victorious Old Boys squad, performances from George Beard and Jack Beresford (who performed a questionable kit change to join the Old Boys lineup) proved to push the squad to victory. The hosts in blue were led by Zach Leal, George Papaleontiou, and Dan Casado.

Despite differing finishes to the games, the mood following the event was a very happy one. Overall, Alumni Weekend 2018 was a great success, and just goes to show how well sport can bring people together, create new friendships and foster old ones. 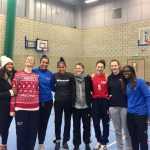 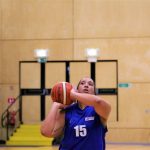 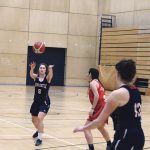 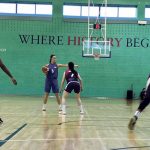