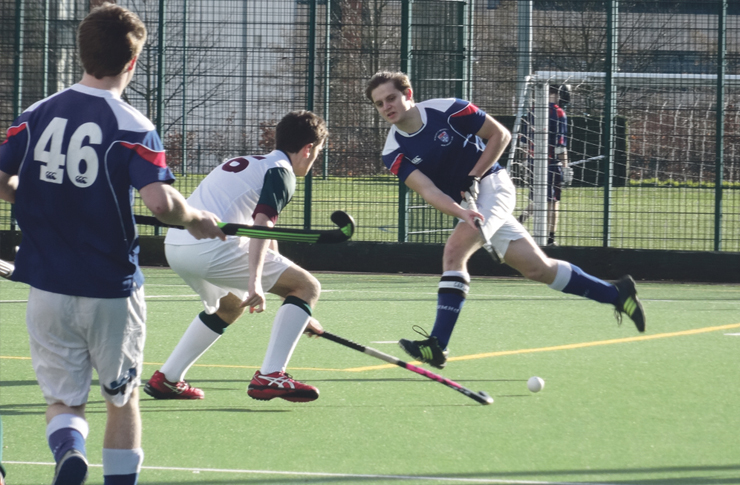 In a high-tempo game, the Newcastle Men’s 4ths once again proved why they are top of the league with a convincing win against their Yorkshire opponents.

With Leeds being bottom of Northern 5B, they looked to add to their tally of two points by using unorthodox tactics. In an attempt to psych out their Northern rivals, Leeds arrived half an hour later than the kick-off time after they “forgot” to organise transport.

Nonetheless Newcastle captain Alexander Bell kept his team warm and fired up in the mid-afternoon sun. By the time the Leeds players finally came onto the pitch, the lads were curling shots in the top bins with ease.

As the match got underway, the Newcastle midfield was fired up and getting in the faces of the opposition. Josh Chambers led by example, pressing the opposition very high up the pitch.

By the time the Leeds players finally came onto the pitch, the lads were curling shots in the top bins with ease

A neat exchange between McCreery, Tim Patton and Bell found the stick of Chambers. After a deft touch, he was left on the turf by a flying Leeds player. Having been targeted by the Leeds players, the midfielder was wound up too much and the umpire gave him a green card for an unnecessary shove after a bit of handbags.

The game ebbed and flowed for the first fifteen minutes, but Newcastle were given a chance to go ahead as Leeds’ Liverpudlian midfielder was given a yellow, perhaps in honour of the ruthless Jimmy Case. However some sloppy defending led to a Leeds short corner that they buried past Andy Russell to put the visitors ahead against the run of play.

But it’s not the first time Newcastle have been 1-0 down this season, and the team’s character shone through as they quickly responded. A pinpoint pass from Oliver Cardoe found George English, who made no mistake in front of goal.

Shortly after Bell was replaced by Harris Owen. The fullback had an immediate impact as he intercepted a poor pass, and found McCreery who in turn switched the ball to Callum Yates. Having carried the ball forward, the defender picked out Sam Kent setting free English once again to clinically finish past the Leeds keeper.

The rest of the half was relatively cagey. Tom Edwards and Owen made some crucial tackles as Newcastle had their backs to the wall following an Adam Arda caution. Just before the half-time whistle, Cardoe had a spectacular effort tipped away by the visiting keeper but that was to be the last meaningful action of the half.

With the team having been refreshed, the lads headed out for the second half. Leeds started with more urgency than Newcastle, drawing level from a short corner that was once again dispatched with relative ease.

However once again Newcastle showed their mental toughness. A Cardoe tackle facilitated an attack that led to a Toon short corner. Tom Edwards sent the ball over to Cardoe, who laid it off for Patton to slot home to restore Newcastle’s advantage.

In an end-to-end encounter, the Newcastle defence had to be on top form to keep out each wave of Leeds attack. Jack Edwards was instrumental in protecting the team’s lead, making three challenges in quick succession that ensured Leeds couldn’t trouble Russell in the Newcastle goal.

Tom Edwards sent the ball over to Cardoe, who laid it off for Patton to slot home to restore Newcastle’s advantage

On the counter, Tom Edwards very nearly set up English’s third of the match but he wasn’t able to reach the pass. Nevertheless the Leeds defence finally relented under the constant pressure, this time with English turning provider as Tom Edwards polished off a lovely Newcastle move.

The remaining moments were dominated by Newcastle as both teams struggled with injuries. Tom Scott became a makeshift centre back as Jack Edwards returned at fullback. The fullbacks had been impressive throughout, with Bell showing some clever touches (including a lovely little juggle in the first half), Harris being technically very sound, Scott regularly rampaging down the pitch, and Jack Edwards being a brick wall at the back.

In contrast the Leeds players turned up looking like they were built like barn doors, but injuries proved they were more built like conservatories than anything sturdier. Newcastle capitalised on this fatigue in the closing stages as Fergus Brown wrapped up what was ultimately a comfortable win.

As another English effort came close to finding the back of the net, the game was drawn to a close. Newcastle were well worth the 5-2 scoreline and in all honesty could have had more.

The win puts Newcastle in the top spot for the time being, but main rivals Huddersfield still have a game in hand whilst only being one point behind. As for Leeds 5ths, they remain on 2 points along with Northumbria 2nds at the foot of the table.

Stan Calvert 2016: “We’re going in as underdogs but we’re going to relish that challenge”