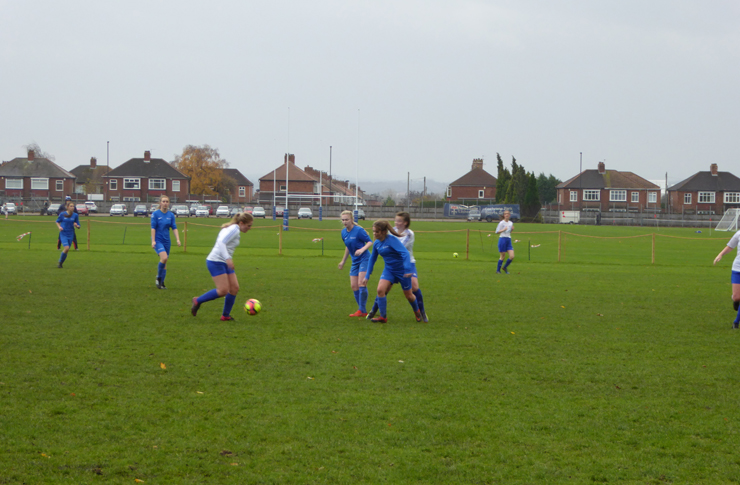 On a typical autumnal Wednesday afternoon, Newcastle’s second string football side lost out to the Liverpool firsts, though the 4-0 scoreline flattered the visitors in the last 16 Northern Conference Cup match largely dominated by Newcastle.

Going into the match, many would have predicted the eventual outcome, as Newcastle sat fifth in the Northern 3B, whilst Liverpool were looking like promotion contenders in Northern 2A, being on equal points along with league leaders UCLAN.

Newcastle’s recent cup record wouldn’t have filled them with much confidence either, having been beaten in the first round of the Northern Conference Cup last year by Salford’s firsts at Cochrane Park. In-control Liverpool made it through to the last 16 before losing out to city rivals Liverpool John Moores.

Though both cup history and league form was against Newcastle, their cup run this year has seen them beat Manchester thirds and Liverpool seconds, whilst Bradford and Chester have been emphatically cut down by Liverpool, beating the latter 19-0 away from home.

The first ten minutes of the match were a cagey affair, with Newcastle putting in the effort to stop any Liverpool attacks forming. From the off, Liverpool looked more composed on the ball, but were losing out in the 50/50s to more eager Newcastle players.

From their first meaningful attack, Liverpool No.9 Olivia Askam broke clear of the Newcastle defence and played an inch-perfect low cross across the box for winger Felicity Mayo to tap in at the far post.

[pullquote]The first ten minutes of the match were a cagey affair, with Newcastle putting in the effort to stop any Liverpool attacks forming[/pullquote]

Having taken the lead, Liverpool continued to pile on the pressure. Newcastle centre back Leila Bartley was called into defensive action on two occasions, sweeping up at the back with pace and composure, but lacking the latter in her distribution.

Tegan Coyle led the line well for Newcastle, bustling and throwing herself around up top. Having won the ball back, her turn inside was the first shooting opportunity Newcastle had fashioned in the match, but she was unable to get a clean shot away.

Soon after, Newcastle keeper Roberta Dewar was thrust into the thick of it, as Liverpool’s Hannah O’Sullivan teed up Noelle Runo for the shot, but the Newcastle No.1 showed safe hands. Dewar had to be on her toes again as O’Sullivan shaped up to shoot herself, but Newcastle right back Georgie Campbell got a firm block in to clear the danger.

Wave after wave of Liverpool attack came down upon the Newcastle goal, as a Liverpool corner threatened to turn into a counter attack, Liverpool countered the counter as Askam scored her first of the game from outside the box.

Despite the goal, Newcastle didn’t panic, looking more comfortable every minute that passed in the game. A good cross from left back Kate Hardy after a flick on from Emily Burns couldn’t find a player in white, whilst a tackle by Hardy led to a chance for right winger Holly Allen to cross, but Liverpool snubbed the danger.

Though Newcastle looked more purposeful going forward, Liverpool continued to threaten at the other end as Liverpool No.8 Beth Wilson dictated tempo from the centre of the park, firing dangerous balls over the top for Askam to chase. A long ball from Gemma Brough was caught by the wind and ended up lobbing the diminutive Dewar in net.

From the restart, Newcastle took control of the game, as Newcastle kept winning back possession and recycling the ball to push on. After interplay between Campbell and Allen gave Coyle the space for a one-two with the onrushing Burns, the forward shaped to shoot but Brough snubbed out the chance.

From another long ball, Askam troubled the Newcastle defence with her quick feet and great balance. After an unsuccessful give-and-go, Newcastle captain Julie Morris mopped up and passed the ball onto centre back Natalie Maffitt, who stepped up into the centre of the park before swinging the ball out to Hardy on the left touchline. A quick one-two with Canadian winger Caitlin Renouf opened up space for Bartley to play the ball into the feet of the Pirlo-esque Rhianne Criddle, who’s clever turn and through ball was cleared for a corner.

Though the corner came to nothing, Bartley recycled the ball, sending a ball to the feet of Renouf, who sent a teasing ball into the box, which was just ahead of the incoming Allen. On the counter, Askam looked to punish Newcastle, cutting through the home side’s defence with craft and guile before leaving Campbell in her wake with a superb turn of pace. The poise and balance of Askam caused her to stand out on the pitch, despite appearing to be no more than 5ft, her strength and body positioning gave her time on the ball, and range of passing was something to be marvelled at.

Renouf continued to grow into the game, becoming Newcastle’s go-to outlet ball and best chance of a way back into the game. Her crosses were well-weighted and dangerous, though Newcastle players rarely gambled on making a run into a decent position in the box.

Newcastle endured a spell of pressure before the end of the half, with Maffitt standing out in the defence. However, during the break Newcastle made some switches, with Sophie Berry substituting on for Campbell, pushing Morris into the centre of defence, with Maffitt being pushed out onto the right-hand side.

The move proved to be a masterstroke, as Morris completely nullified the impact of Askam, consistently intercepting passes and holding her up in defence, as well as making challenges where necessary, with those on the sideline drawing comparisons to a young Titus Bramble.

Newcastle’s best chances of the second half fell to the mercurial Renouf, who fired wide from Coyle’s ball under pressure from Brough, as well as being put through on goal by Burns before Brough again threw herself in the ball’s path to concede just a corner.

Mayo had the best of Liverpool’s chances, hitting the bar before a firing a mazy run into the side netting. However, the decisive moment came out of nowhere moments later when Askam bent a left-footed shot past Dewar from 25 yards out.

Newcastle threw Amelia Stennett and Charlotte Holden on towards the end, with the former doing damage down the right flank, whilst Holden controlled the midfield after she came on, regularly giving Newcastle purpose in possession.

Though the full-time whistle may have come as a relief to some of the Newcastle players, they can take pride in how they played in conditions that strongly favoured the opposition. Nevertheless, Newcastle controlled large portions of the game, though they weren’t able to fashion enough clear-cut chances to deserve the win.

Morris and Maffitt were stand out performers at the back, whilst Ranouf’s pace and trickery along with Coyle’s upper body strength and hustle kept them dangerous. However, being against a first team, Liverpool had a standout player in Askam that was able to provide the quality in an otherwise scrappy game. Liverpool firsts now await their quarter final opponents, whilst Newcastle seconds will have to wait until next year to dream of cup glory.

Durham and Hallam slammed but Manchester too much

Second try at Clash of the Titans