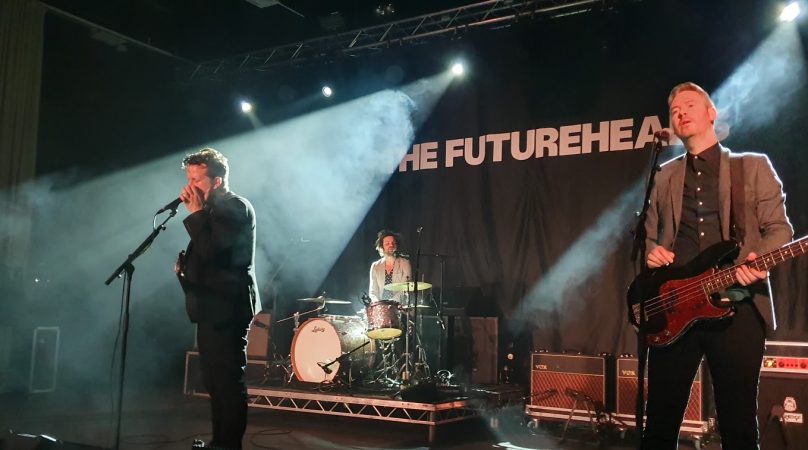 Finlay Holden reviews The Futureheads as they take to Northumbria Institute, performing their debut album in full to celebrate 15 years of its success.

I walked into the Northumbria Institute to see what appeared to be 4 random musicians jamming together to different songs – I quickly realised this was the Sunderland-based band Roxy Girls. Their set contained a few moments of fun guitar riffs, but mostly just sounded like a jumble of noise with nothing much to take notice of. The band had little stage presence, merely standing still and failing to captivate what little audience they had. A couple of songs towards the end showed the band being somewhat cohesive, but the lead singer was still just shouting into the microphone with no tone whatsoever, which failing to interest me.

Thankfully, Indoor Pets made a massive improvement on this, immediately capturing the crowds attention with their rocky headbangers and a quick intro by the charismatic frontman. The music was consistently enjoyable throughout, and with the band clearly enjoying themselves it becomes difficult to stop a smile creeping upon your face; the guitarist writhing on the floor while shredding was a highlight.

Tunes like ‘Hi’, ‘Being Strange’ and ‘Teriyaki’ give poppy riffs, unique high-pitched vocals and funky basslines that enthrall the room, with several people shouting the verses along. I highly recommend giving this London-based 4-piece a listen, as their quality indie-rock style is only more enjoyable when infused with an exciting live performance.

Finally, it is time for The Futureheads to stroll on. Before they even appear, it is apparent that this is a legacy show more than anything; the average age in the venue was higher than I had seen in a while, and it turns out the whole gig is a celebration of the band’s self-titled debut album, which came out 15 years ago.

The packed room jumps with excitement as the Sunderland 4-piece make their way through the record. They certainly give a unique show, blending rock with acapella with effectively 3 leading vocalists creating a special soundscape that allows fans to chime in with chanting throughout almost every song, with lyrics touching on laziness, people acting like robots and false conversations.

There is some impressive guitar work by frontman Barry, who it is revealed halfway through the show is currently suffering from laryngitis – this only makes his strong performance even more impressive. Between almost every song the three vocalists keep things lighthearted with some classic Northern banter, especially making light of the current political climate – it couldn’t not be mentioned on the day of the 2019 general election results. The bass player comments that it is very strange for them to be playing the album in order, but every song sounds just as good as the original recording, if not better with the audience participation.

Their cover of ‘Hounds of Love’ in particular, the penultimate song on the album, has the room dancing like crazy, with multiple fans interpreting the line ‘take my shoes off and I’ll throw them in the lake’ very literally as odd heels and trainers are launched at the frontman.

Once the album is played through, the encore features some more recent songs, still maintaining the essence of heavy guitar with acapella vocals, including ‘The Beginning of the Twist’. They also give a great rendition of ‘Christmas in the 1980s’ which, with the red and white lighting, was a great way to mark the end of term for myself.

Overall, despite not being a fan of The Futureheads’ post-punk style and spiky guitars in general, I can see the appeal and it is clear that they still have a strong fanbase who hold their debut in high regard to this day. They made a great decision bringing Indoor Pets along on their tour, and although I will certainly never listen to Roxy Girls again, the gig was thoroughly entertaining and clearly brought joy to a diverse crowd on a cold night in December.