Gig Review: The Hoosiers at The O2 Academy 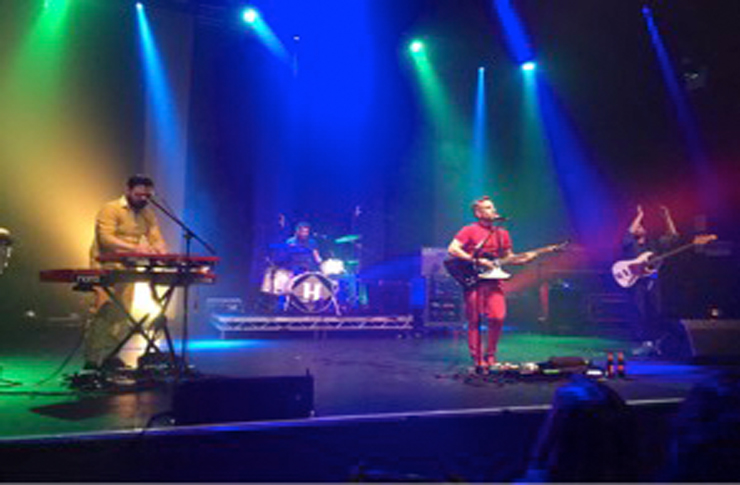 Our favourite pop rock band from the Noughties were back in town on Wednesday 1st November, stopping by the O2 Academy for their ‘Tenth Anniversary Tour’. They were welcomed back to Newcastle with a performance on the main stage, their first time back in eight years.

For most students, The Hoosiers sing tracks of our past, and everyone can remember where they were the first time they sang-a-long to ‘Goodbye Mr. A’. The room was filled with a mixed age range, and the atmosphere was steady and relaxed, the crowd warmed up by the support act Zeals. The Hoosiers knew everyone was there to hear their favourite songs and that is exactly what they played.

The stage was set up in four block colours, yellow, red, blue and green; the four colours their first album was released in. The band matched the colours, with Irwin in red, Al in blue, the bassist in green and the keyboardist in yellow. It made a smart look, and is different from anything they have worn before at concerts.

After strutting on stage, they knew what the crowd wanted and kicked off with ‘Worried About Ray’ to get everyone singing and dancing. Between Irwin and Al a lot of joking about was had on stage and they were happy to have a chat to the crowd throughout the gig. They recounted how much they love Newcastle and were just so flattered to see everyone here tonight.

Irwin was impressive on the guitar, moving up and down the stage, whilst playing some strong solos, particularly in an attempt to rouse the crowd whilst playing their less well known hits. It was suprising to see not that many people dancing, and I can only imagine The Hoosiers might have been slightly disappointed with the lack of enthusiasm at times. It occurred to me that too many people are more interested in filming the show on their phones, rather than enjoying the moment.

Irwin told the crowd that to “sing along or dance along were the only two options” and his command was met.

Their plan was to play the album from beginning to end, so ‘Cops and Robbers’ was up next. Irwin told the crowd that to “sing along or dance along were the only two options” and his command was met. Everyone remembered why they came to see The Hoosiers and the fantastic aura they give off live.

Irwin swapped his electric guitar for acoustic at points and I really enjoyed the acoustics they played, in particular one track, ‘Everything Goes Dark’. Al spoke about its allusion to mental health and the importance of everyone being open. It was a step back from their upbeat pop, and a more chilled time to sit back and listen to the lyrics.

It was fantastic to see such old hands at the game back in full force and they played the night out with arguably their best song, ‘Choices’, leaving the crowd wishing they had been dancing even more.