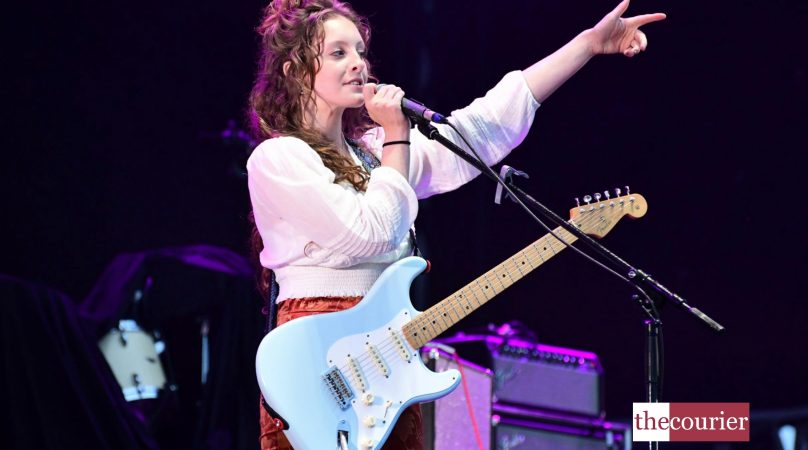 Just two weeks after she walked out on stage at the UK’s first socially-distanced gig, Finlay Holden talks to Heidi Curtis about playing to crowds of thousands, working as a young artist, and music in the North East.

Hi Heidi! How are you, and what’ve you been up to recently?

I’m great, thanks! Not much, since the gigs I’ve just been writing and getting ready to go back into the studio again so it been quite nice, I’ve sort of had the last couple of weeks off and I’ve just been chilling and watching some films. Were those gigs real? I can’t believe that actually happened.

How did you first get involved with the Virgin Money Unity Arena gigs?

How did that even happen? I don’t know, my manager Tom just rang me and was like this is happening! It was still all quite under wraps, like nobody really knew what was happening then suddenly the posters were up and I quickly had to get the band back together to start rehearsing again. I really enjoyed getting back to the constant work though. I had no idea it’d be so big before I started doing some research and I was like Jesus, that’s a lot of people!

And this is the biggest crowd you’ve played to yet?

Yeah! It was 2,500 but in a 40,000 capped venue which was strange but I can’t even explain, it is absolutely humongous, the biggest stage I’ve been on by far. I was super nervous at first but there’s just so much air to breathe, you’ve got so much space that you calm down quickly.

How long was your set?

It was half an hour on the dot. I had it longer but had to cut a couple of songs because I didn’t wanna take the mick and have them have to drag me off haha. I had 8 songs altogether, one of which was a cover of ‘Edge of Seventeen’ by Stevie Nicks.

What would you say to those who are critical of the whole set-up?

Overall, I think people have to participate with the intention of treating is as an evening experience. You can see your favourite artist, be it up close or on the screens, so think of it as a gig, yeah, but you’re also having some drinks and hanging out.  For the first time for a while, I saw people not just on their phones but actually enjoying the whole gig environment, just enjoying sharing it with their friends. You’ve been in the house for 5 months, how can you complain about an outdoor gig?

Are you gonna go back and see some gigs there yourself?

Yeah, I’d love to! I’d really like to see one of my friends L Devine who is supporting Becky Hill, her music is awesome. Sadly I missed the ABBA tribute, Bjorn Again, that would have been incredible.

Where else have you enjoyed performing in Newcastle?

I haven’t actually played it, but I really like Little Buildings, I’ve seen gigs there and it’s really nice inside. Down in Ouseburn, there are loads of hidden places where you wouldn’t expect to find such great music. I’ve played the Cluny, that’s awesome, its like the pinnacle of gigs in Newcastle, a rite of passage. Loads of huge people have played there.

I’ve totally forgotten Surf Café too, the one I’m in every week! I did my first ever open mic there, its another home of great acts. The Amazons, who I really like, played there ages ago. My first ever gig with a proper band behind me was there too, supporting Kitt Trig. That was a real step up, since then everything kicked off.

Are you friends with many other UK musicians beyond the North East?

There are so many that I want to be friends with that are so cool, but of course, they’re all down in London. Beabadoobee I starting following because I knew she was a singer, but I just loved her outfits. I’m always loving music from around here, but I’ve been listening to loads of Irish music recently; Inhaler, Fontaines D.C., Sprints who I just found – they have a playlist of Irish pop-punk which I’ve been listening to.

Inhaler are dropping some vinyl for the first time for RSD this week – are you a fan of physical music in general?

Potentially when I’ve got enough money to buy a really good record player in my own flat and stuff, I would love to play vinyl all the time. My rooms way too cluttered for that setup right now, but I do have a pile of cool records. I love it not just because it sounds cool but because you get the cool sleeves and mad artwork, I love finding really cool covers. I think that’s why it’s coming back in.

When I release an EP, I want to have a vinyl with a hidden song on there that’s totally different. I wrote this French house song when I was 16 which is so different to my normal music, I want that in the middle of the vinyl so everyone’s like “what the fuck!?”. Maybe I can get a French number one!

Do you think it’s important for fans to buy music & merch to support artists?

Yeah especially now – other than some who are able to stream gigs, a lot of artists have lost a huge amount of their money from the live side of things – you don’t make loads just off the streaming anymore.

What albums have you been listening to over lockdown?

Mostly old stuff – ‘Breakfast In America’ by Supertramp, that was on repeat for the first part of lockdown, loads of good heavy piano. I forgot how good ‘Rumours’ by Fleetwood Mac is as well, I’ve listened to that too much. ‘The Rise and Fall of Ziggy Stardust’, lots of Bowie. I’ve turned into a real Billie Eilish fan over lockdown, her debut is just so cool and atmospheric.

Do you feel like younger artists are treated at all differently in the music industry?

I feel like there are a lot of younger artists coming into the mainstream of the music industry at the moment, Billie Eilish started at like 13 or something. There are a lot of people the same age trying to do the same thing, so to catch attention I think you have to be mature as a person – not that I’m saying I always act mature haha.

The perspective on life that I have is that most petty things are not my vibe, the best young artists now are writing about really important issues; you want the lyrical side and meaning to be just as good as the melodies. It’s hard to do that at a young age, I’ve only matured in that way over the past year where I want to avoid writing about the basic topics because I don’t feel its important.

Do you think moving away from love songs is a vital aspect of being taken seriously then?

Definitely. The subjects that I’ve been writing about have been much more personal and mature and the way I’m writing lyrics is something I’m a lot more proud of. I think it comes from the fact that I’ve listened to some great influences that have changed my views on what is actually important in my life. I haven’t got a boyfriend and to me finding one isn’t massively important – I’m watching the world we live in and realising that humans, in general, aren’t the greatest thing for our planet, and that’s what really bothers me.

I’m watching the world we live in and realising that humans, in general, aren’t the greatest thing for our planet, and that’s what really bothers me.

Over lockdown I’ve been amazed at the issues that have been brought up – the amount of police brutality highlighted in every country is shocking. It’s so easy to get stuck inside your own problems but recently lots of people have come out of that and can see the world for what it is and recognise all these huge issues going on. Suddenly the issues of boys and relationships are just not important because there are people out there still fighting for the right just to be themselves and being discriminated against because of who they are, who they love or where they’re from.

My eyes have just been opened to topics that deserve to be spoken about more. There are of course things that still bother me and make it into songs, but not all my writing is like that anymore. Sorry about the ranting haha.

Do you prefer playing live or being in the studio, if you had to pick one?

Playing live but only by a little bit, and only because I haven’t spent serious time in the studio yet. The next few weeks will be the first time that I take songs in and invest a lot of time into working on them. Playing live is just such an adrenaline rush, I can’t even explain the feeling it’s just awesome – when it goes well anyway. I’ve had some live streams which didn’t go great.

I want to release stuff, I want to play, and do some headlines – definitely get on a tour. I don’t think COVID has really ruined 2020 for me, I achieved a lot of what I wanted, but 2021 is gonna be a really great year!

Stay safe and wear a mask!