Lacrosse loving life in the league 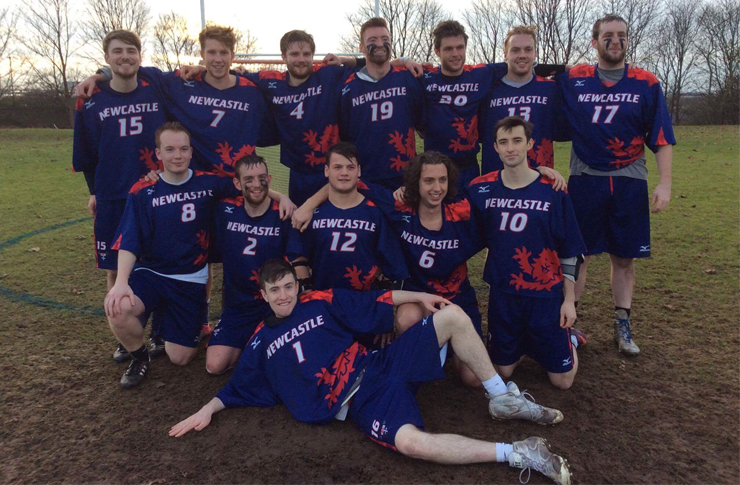 A new season comes with new hope for men’s lacrosse firsts, with an influx of 2 Americans, Conor Doyle and Ryan Scott, as well as two previous English academy players, Jack Clohessy and Matt Rees, to support the already experienced seniors at the club, the team has returned with a new freshness to their side.

The end of last season saw the team finish 6 for 4 losing out to rivals Northumbria and an impressive Sheffield Hallam team stacked with England players. This year has proven very different; the team started out with a very commanding victory against Leeds 1sts securing a 17-2 win which sent them straight to the top of the table.

General lacrosse IQ and quick ball movement was enough to secure the win against Leeds but when it came to the first away game versus Sheffield 1sts it was very much a different game. Starting slow, at half time the score was more resembling of a football score than a lacrosse game sitting at 1-0 to Newcastle. Finishing 7-1 to Newcastle, there were early signs of a defence working extremely well, and with Clohessy making wonder saves, there was great promise from such a newly formed side.

The first real test given to the team came in the form of Northumbria first team. In a nail biting and freakish game, witnessed by both Newcastle and Northumbrian Alums, the rivals clinched the victory by a one-goal margin 4-3. The opposition for many periods of the game had no intention of extending their lead, only to run down the time.

Newcastle have since taken this experience positively and regrouped. They now sit 2nd in the table with a four-game winning streak. This has included another commanding 15-2 win against Leeds, a win in the cup and Newcastle also overturning both Sheffield universities in consecutive weeks. The fixture in the cup took Newcastle to Nottingham Trent University, where we saw a weakened team due to injuries win 20-5, with most importantly Patrick Kearney stepping up at the Face-Off and Matt Holland winning man of the match in his first team debut.

The next game Newcastle played host to Sheffield firsts, in which turned out to be another nail biter finishing 10-9 with one Newcastle goal being incorrectly discounted by the referees. Nevertheless NULAX showed mental toughness to edge over the line and secure the win against an improved Sheffield side.

“There was great promise from such a newly formed side”

The close of the season proved almost to be a mirrored game against Hallam firsts although there was a change at the Face-Off with Tim Deehan recovering fully from injury, again Newcastle seemed like they were taking control only for the score to finish 12-11. Conor Doyle, Rob Baldwyn and Luke Ramsbottom scored at crucial times to ensure Hallam gained no momentum, and again at the other end of the pitch Clohessy made vital saves to keep Newcastle on the front foot.

The start of the season has proven very generous to the club; with a new intake of talented beginners the second team has also seen some success. The club are very proud of the fact that newcomers can turn up to training and receive some top-class coaching from experienced players.

Importantly, the most influential players and committee members start out as beginners so NULAX are very accepting of new members from any background of experience. It will certainly be a Merry Christmas for the members of NULAX and especially the first team and hopefully this will only extend their success in the league, cup and the Stan Calvert.