A barmy crossover between Mario, Rabbids and strategic warfare that's more than the sum of its parts.

Like Doctor Frankenstein in his lab, the developers of Mario + Rabbids Kingdom Battle have grafted together that which should never be combined – Super Mario, firearms and gaming’s answer to Minions – and produced something so strange that the announcement trailer seemed like a late April Fool’s joke. Nonetheless, like Frankenstein’s creation, Kingdom Battle pulses with a life greater than the sum of its parts, a lively, robust and deep experience that baffles while it amazes. How on Earth did this ridiculous premise result in such a lovely game?

In a few words, Kingdom Battle can be described as ‘Mario XCOM’, a turn-based strategy game focused on cover and positioning over out-and-out power. The player commands a team of three characters chosen at the beginning of each sortie – from a selection of Mario, Peach, Luigi, Yoshi and their Rabbid counterparts – and is given a set number of turns to accomplish an objective that varies each map. Each fighter brings a different ability and equipment load-out to the table which helps them fulfil a certain role in the team, such as Luigi’s combination of sniping and remote drones making him an excellent battlefield controller.

In a few words, Kingdom Battle can be described as ‘Mario XCOM’, a turn-based strategy game focused on cover and positioning over out-and-out power.

You can further customise and upgrade your party members by acquiring Orbs, little purple spheres that are this game’s experience points. Every character has a unique tree of advancement, both bolstering their extant skills and obtaining new ones, allowing you to create a surprisingly intricate and cohesive strategy to bring to each battle. I was delighted to discover Rabbid Peach could unlock the same sentry ability as Luigi, and together the two of them dominated the early chapters through a program of precision anti-Rabbid drone warfare. You can pick your party and evolve your abilities to suit many playstyles, a combination of freedom and user-friendliness that’s one of the chief joys of the game as a whole. 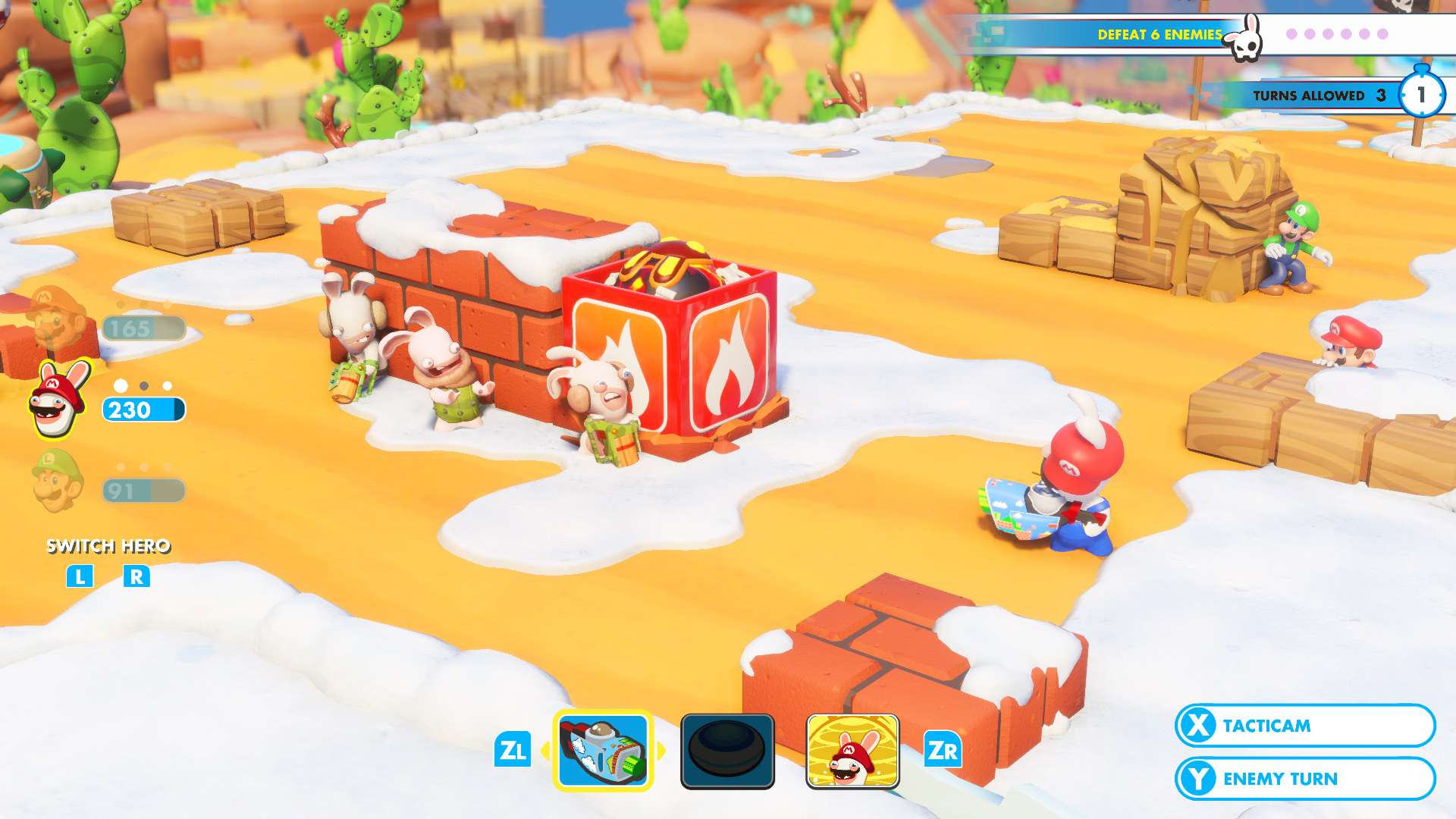 But what ties this all together and pushes the game past its competition is the central philosophy behind its design: enabling, rather than restricting, the player’s choices. Many other entries in its genre derive challenge by slapping restraints on the player, hobbling them with costs, meters and requirements that necessitate stressful micromanagement. Kingdom Battle sheds this arbitrary complication on gameplay through streamlining its combat and focusing on effective controls while allowing you unparalleled tactical freedom.

But what ties this all together and pushes the game past its competition is the central philosophy behind its design: enabling, rather than restricting, the player’s choices.

Your sole resources are cooldowns, your abilities are powerful, and the rewards for quick and effective movement rich. Its challenging moments – and it does get quite challenging – are created because your enemies have access to these too. Mobile Hoppers leap around the battlefield to flank you while Supporters heal them from afar, brutal Smashers punish you for grouping up just as Peek-a-Boos draw solitary heroes to their doom.

Your tactical abilities, far movement range and strong attacks feel less dominating when they’re all being used against you by an AI who means business. Battles become thrilling games of cat and mouse, planning and improvising, all in a sleek, efficient form played at your own pace.

This is why Kingdom Battle is as fun as it is. It’s full of many of the tropes that make the strategy genre great without the statistical clutter, presented with visual flair and passion. Don’t let the Rabbids put you off: this is one battle worth fighting.