Mythbusters: is the Pineal Gland Psychic? 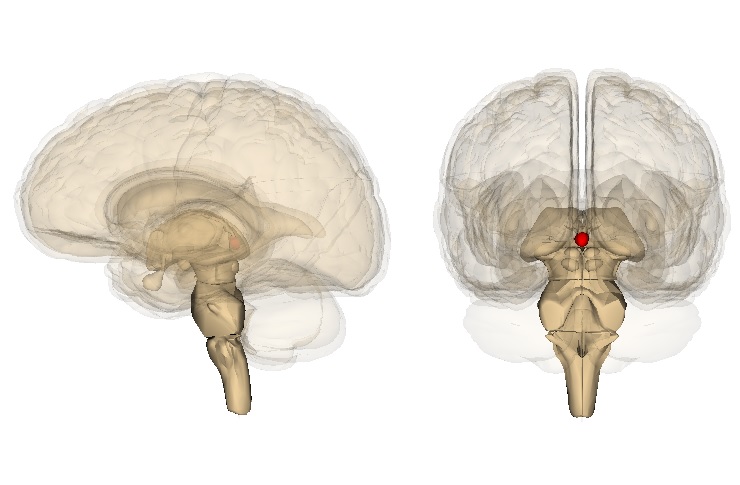 Once called the “third eye”, the pineal gland is a small gland located deep in the centre of the brain. The pineal gland was one of the last brain organs to be discovered and has been the subject of much mythology and speculation. The seventeenth-century French philosopher Rene Descartes believed the soul was located in the pineal gland.

The brain is comprised of two distinct hemispheres connected by fibres. The pineal gland is located in the middle of the brain, in between the two hemispheres. We know that the Pineal Gland secretes melatonin, which is a hormone that helps regulate circadian rhythms. Circadian rhythms are the daily rhythms of the body, including signals that make someone feel tired, sleep, wake up, and feel alert around the same time each day.

However, research into the link between melatonin and its role in our sleep cycles led to a study that observed when the pineal gland was removed from a sample of rats that had access to a normal amount of light and dark, their activity levels were not affected. They concluded that the function of the Pineal Gland may be more complicated than initially thought and that its role may vary widely between different animals. Their complete function and purpose in humans is still the subject of much debate and speculation.

The pineal gland was once some sort of photoreceptor, but for what purpose?

Throughout human history, the reappearance of a third eye (or the mind’s-eye or inner-eye) appears among many civilisations; well before the organ’s existence was even known of. What makes this even more curious is that the study of its evolution suggests that it was once some sort of photoreceptor (and may still be), but for what purpose?

The Ancient Greeks believed it to be our connections to the “Realms of thought”; Buddhists hail it as the symbol of “Spiritual Awakening”; Hindus connect the Pineal Gland to “Intuition and Clairvoyance”; even freaking Jesus proclaimed that “The eye is the lamp of the body, if your eye is clear, your whole body will be full of light”.

If Rene Descartes is right, and the pineal gland is indeed the seat of the soul, then these traditions are correct in believing that the organ may serve as the connecting link between the physical and the spiritual realms.

Disclaimer: image may not be entirely representative of psychic powers

The idea of a separation of physical and spiritual realms has never quite sat right with me, I’ve always preferred to view this so-called spiritual world as more of a higher dimension of existence, one that we are not able to grasp or understand; how would you even go about explaining a 3D existence to a 2D being?

So, can I say that the pineal gland straight-up gives you psychic powers? No, I am afraid that I cannot. Ancient and modern beliefs suggest that the utilisation of a toxin-free diet, the correct meditation and the right amount of sunlight, a person should achieve some form of extended operation or activation of their Pineal Gland, granting them some sort of observable powers beyond the realm of what we can explain with modern science.

If such powers have been achieved by a human being before, either they cannot be measured and observed by modern scientific measures, due to our own lack of understanding and acceptance; or we simply never believed the raving lunatic that claimed to have such powers, with only a small handful of people taking ever them seriously.

However, I personally believe that there may be more to this than meets the eye. All we need to do is open it and look right at what we’re missing. I’ll leave you with one last quote from Tesla, who let’s not forget, Albert Einstein held as the smartest person to ever exist.

“The day science beings to study non-physical phenomena, it will make more progress in one decade than in all the previous centuries of its existence.”

Word of the Week: Pasteurise