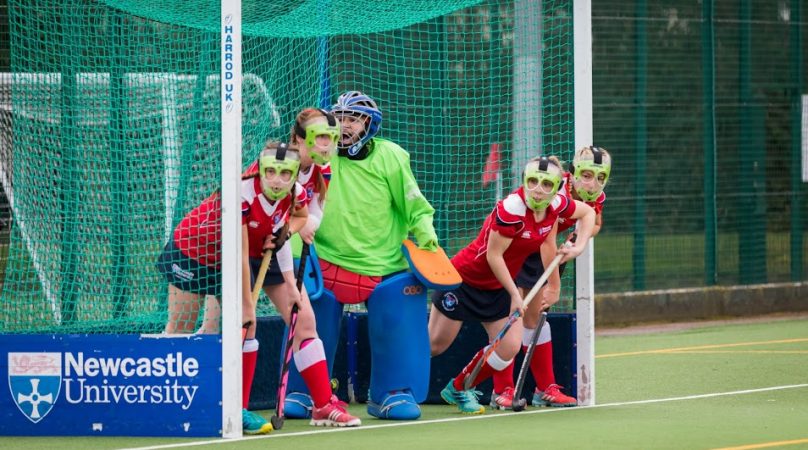 Newcastle University 5’s were unable to make it two wins from two in their 1-0 derby-day defeat to Northumbria University 2’s.

The ‘famous’ fives had managed somewhat of a field day last time out against the neighbouring polytechnic; completing an assertive performance to take home the spoils with a 3-0 win back in the first semester.

On this occasion, there had already been disruption to the five’s preparation. Just that morning usual shot-stopper Alice Dale was called up at the last minute to the fourths team who were lacking in the goalkeeping department. This led to replacement goalkeeper Anshrah Saqib making her debut for the fifths, having predominantly featured for the team below prior to the match.

The first half saw Northumbria dominate the possession throughout, with key individuals in their midfield managing to construct key pass combinations to force Newcastle to largely defend from their own half.

Dogged defending from Tara McConaghie in particular led to successive blocks from short corners, with McConaghie at one point electing to rip off her protective mask in order to continue her chase of the ball after initial success of clearing it from here lines.

Former NBA basketball player Robert Horry once said that “pressure can burst a pipe or make a diamond”, alas on this occasion the former came to fruition as sustained poly-pressure led to Northumbria taking the lead on 25 minutes that would turn out to be the sole goal of the game.

Newcastle sparked a mini-revival ten minutes from half time, with sustained pressure leading to half time with just a single goal deficit.

Coach Hannah Cashell took her fives-aside for a half time consultation away from her dugout and fans in attendance. It was clear from her hand gestures that her briefing was full of passion, understandable given the first half was somewhat lax compared to what the girls usually expect.

Cashell’s words had evidently stuck, with sustained pressure and build-up play leading to a cracking effort from Polly Ashford, only to be blocked away by the Northumbrian defence for a short corner.

Newcastle’s newfound intensity was equally matched by an all-round impressive Northumbria midfield, whose physicality and powerful passes meant that they could counter effectively.

This led to a chance that, upon leaving the Northumbria attackers stick, was destined for goal, were it not for the last-ditch clearance from Sohpie Chaney to keep Newcastle’s deficit to just a single goal.

This close call seemingly provided the inspiration to inject more venom into their game. For the first time in the afternoon, it appeared Newcastle realised they were playing in a derby.

Ashford was key to this, before being forced off with a leg knock; she was providing key pivots from defence into attack for Newcastle. This link became especially fruitful for Sophie Sheaf and Alicia Boyle; with Ashford finding each in more attacking areas compared to the first half.

The sustained pressure alas led to nothing more than a missed chance from Abbie Spencer from a Sheaf through pass. Newcastle was knocking, but on this occasion to no avail.

1-0 was the finished outcome on what proved to be a frustrating afternoon for Newcastle.

“The second half was played with a different attitude”

Coach Cashell begins her post-match dissection “The first half started slowly, but we retained the majority [of] possession. A few defensive errors led to a turnover that left us a goal down”.

“The second half was played with a different attitude and drive for the ball, unfortunately, it didn’t lead to any goals”.

Cashell made sure however to commend the girl’s efforts despite ending the season with a loss, with the fives bouncing back to winning ways since the defeat in a non-BUCS game.

Loco for Coco: the future of tennis


Swipe right to see the empty streets of Newcastle

A huge thank you to the courier team including edi