Ones to watch: The Snuts

Hope Lynes earmarks The Snuts for this weeks ones to watch before they blow up.

With only singles and 1 demo EP under their discography, The Snuts are breaking into the indie music scene with incredible speed. The 4 piece from Scotland are rising up the ranks at festivals and this year has seen the band become one of the hottest new up and coming bands on the indie scene, creating hope for the future of guitar music.

Notable song mentions include Glasgow, All Your Friends, The Matador, What's Going On? and Sing For Your Summer. The band clearly have a very unique sound because every song sounds different in its own way yet still distinctly them.

Glasgow was the first song put out in 2016. The way the song changes from a romantic guitar riff into a perfect summer festival tune shows the magic of the band, making the song incredibly beautiful and positive. All Your Friends was released earlier this year and showed a change in sound for the band, as the riffs got heavier and the bassline on this is one of the best I have heard for a long while. The Matador is again relatively heavy when the song progresses and this song really demonstrates the vocal skill of the lead singer. Finally, Sing For Your Supper is an incredibly beautiful song with powerful lyrics and a tune that is very memorable and could easy be classed as a classic indie tune in the future.

Homeland Scottish gigs sell out in seconds, and most of their UK autumn tour also sold out. They've made their way up the festival scene, as last year saw them on the BBC Introducing Stage at Reading and Leeds, whereas this year the band were placed on the much larger BBC Radio 1 stage. They also had major slots at festivals such as TRNSMT, NBHD weekender, and Kendal Calling, with many fans speculating an slot even higher up the bill at TRNSMT for the band next summer due to the band's success in Glasgow and the surrounding areas.

I've been following the band for a while and recently saw them in Liverpool at the Arts Club in September, and the energy at the gig was like something you'd expect at a concert of a legacy band, fans singing every word and even the riffs with incredible energy and love for the anthems.  I believe within a few years this band could well be on the way to headlining the likes of Kendal Calling, and in the future, even Reading and Leeds with the amount of intense support the band get from their passionate fans. 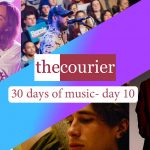