Pain with pain: is sadness necessary for art? 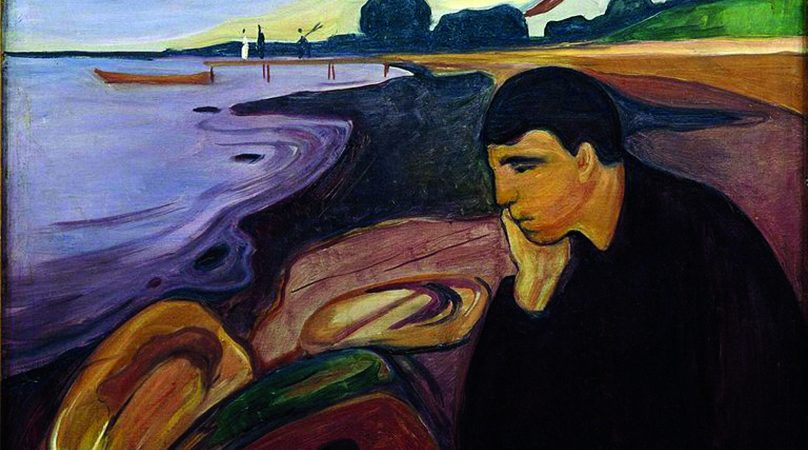 “Writing is easy. All you do is sit down at a typewriter and bleed”- Ernest Hemingway.

It is undeniable that sadness is the inspiration for many great pieces of art, literature and music. The theory that great art is inspired by suffering dates back to ancient history, with Greek philosopher Aristotle arguing that “no great genius has ever existed without a strain of madness” and continues today with the labelling of ‘tortured artists’ such as Amy Winehouse and Kurt Cobain. It is the idea that a person who is sad (or even suffers from mental illness) has a higher level of creativity, and therefore has a higher quality of artistic output.

There is a strong case to be made for the connection between sadness and art, including many examples throughout history: Van Gogh suffered with mental illness while painting The Starry Night; Sylvia Plath’s Ariel poems famously anticipate her suicide; Edgar Allan Poe’s writing was inspired by the death of his wife; Charles Bukowski’s experiences of alcoholism and depression heavily influence his poetry. These are just a few examples- history is filled with tortured, creative geniuses whose suffering lead to great works of art.

Sadness is often associated with introspection and thoughtfulness, which translates itself to art very well. This is not to say that happier emotions can’t inspire art, but that art inspired by sadness often has more depth and is perhaps more insightful. Art comments on what needs to change in the world, and often this kind of understanding is motivated by a sadness about the way things are. For example, Bob Dylan’s music in the 1960s frequently references a dissatisfaction with the world and a desire for change. As such, sadness seems to offer a more interesting insight, which makes for better art.

Although this kind of thinking runs the risk of romanticising mental illness, the idea that sadness can inspire great art might encourage people who are suffering to find an outlet in art. This is not to say that people who want to create art should aspire to sadness, but that those who are sad should aspire to art. Art is often used as a form of therapy, and a lot of people who are suffering naturally turn to art as a way to express themselves. Art is the way in which a negative emotion like sadness can be transformed into something valuable and brilliant.

To deny the abundance of mental illnesses we see expressed in art would be disingenuous: Sylvia Plath was renowned for poetically recording her experiences in a mental institution before her suicide at the age of thirty. Viewers are certain they see sparks of Van Gough’s dwindling sanity in his most famous works. Frida Kahlo has recently become the subject of multiple exhibitions that present her paintings alongside their increasingly painful and tragic biographical context. But this link between artistic ability and mental suffering has become over-simplified; one is not caused by the other, nor are the two mutually exclusive. Instead, this trope of the tortured artist is a self-perpetuating stereotype that must be dismantled to protect future artists and their work.

The examples of brilliant “tortured artists” throughout history are endless. If the link is so inarguably prevalent, how can we account for it? To begin with, we must examine the direction of this causation. According to psychologist Dr. James Kaufman, great artistic works do not perpetuate mental turmoil. Rather, they outwardly express an already existing problem that would not otherwise be seen so publicly. This leads to a false conflation to be drawn between suffering and art, simply because artistic expression exposes a problem that is unexpressed but similarly suffered by the non-artists all the time. Mental turmoil does not necessarily create the possibility of great art, either. While extreme suffering can be relieved via artistic expression by creative types, their inherent creativity is not caused by their struggling. Rather, Kaufman hypothesises that creative fields have a tendency to attract those who already suffer from mental illness. In other words, the two factors are correlated but not caused by one another. To have a creative flare and not a mental illness is both possible and preferable! Van Gough’s creative genius might have given the world more had his life not been cut short by his suicide. Plath’s poetry might have taken a new turn had she been able to fully recover from her terminal depression.

‘Mental illnesses are portrayed as this strangely beautiful and mysterious way of thinking that defines, rather than cripples, a person’s creative worth. In reality, they are an undesirable and debilitating; artists create great art despite, not because of their demons. ‘

So, the relationship between artistic talent and mental illness is not directly causal. However, the conflation can be self-perpetuating; in a sense, the notion of a “tortured artist” causes itself. While creative expression about mental illness can provide a vital outlet for sufferers, it treads a fine line between destigmatisation and romanticisation. The concentrated abundance of dangerous mental health issues within creative industries can normalise their severity and create a group idealisation of the problems they were originally seeking to relieve through their art. This convoluted cycle of artists and their torment is exacerbated by Social Media, where communities build around the aesthetic of group suffering rather than an a means towards alleviating it.

Mental illnesses are portrayed as this strangely beautiful and mysterious way of thinking that defines, rather than cripples, a person’s creative worth. In reality, they are an undesirable and debilitating; artists create great art despite, not because of their demons. Painting a masterpiece is a stretch when depression makes leaving the bed and showering a difficult task. Writing deep poetry about your suffering is hard when your Eating Disorder means you are too malnourished to think straight. To be a creative unhindered by the dangerous symptoms of mental illness is the artsy aesthetic I’m striving for.