Punctuation wars: which punctuation mark is most elite? 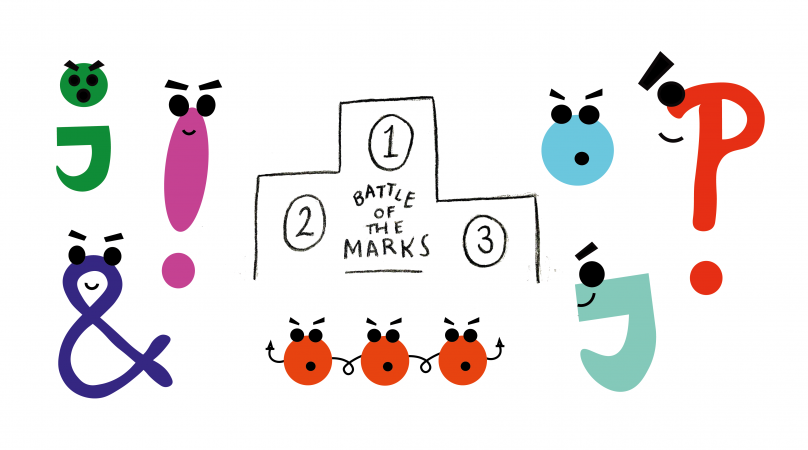 As it transpires, our arts writers are very opinionated when it comes to the question: which is the the best punctuation mark?

Is this a frivolous thing to discuss? Probably, but we’re doing it anyway. Read our writers’ arguments and cast your vote at the end. Let the battle commence!

Never to be used in a serious setting, exclamation marks are to be used on just two occasions: sarcasm and reassurance. A flock of !!!! will instinctively follow any attempts at humour just to make my friends aware that I can in fact wait for my impending doom. More importantly, they (plural) have a way of dispelling anxiety surrounding messaging…for about one second. Every time I hit the key ! it’s ! as ! if ! a ! balloon !! full of !! anxiety !! pops! in ! my chest !! Before it starts to fill again, so another MUST be used. Never to be used to show actual excitement, but instead for your own sanity, naturally, the exclamation mark is my favourite !!!!!!!!!!!!!!!!!!!!!!

It’s bold. Observe as the supple curve of a ‘?’ juxtaposes the jutting confidence of a ‘!’. An elegant combination of two splendid punctuation marks, the interrobang helps you through written situations where you want to express excitement!! but also maybe hesitation?? It saddens me deeply that few typefaces accommodate this beautiful symbol, but some big names seem to value it: the default font for legacy versions of Apple’s OS X includes the interrobang, and MS includes many versions of the symbol in their ‘infamous’ Wingdings character sets. If it’s good enough for Jobs and Gates, it’s more than good enough for me – though I’m not sure that’s an entirely good sentiment to end on‽

The best piece of punctuation in use today. It’s ingenious as a tool of communication. Other marks are necessary to properly communicate, but the ampersand is just shorthand for an entire word, one that’s used too regularly, cluttering up delicate prose. Out with the and, in with the &. It also looks quite cool.

Other punctuation marks may add flair to a piece of writing but without the full stop we would get nowhere.

This piece of writing would be an incomprehensible mess of never ending clauses that run on and on and on. At least with a full stop you get a chance to breathe. I am surely not writing an exciting passage by omitting all other punctuation marks. And perhaps it flows less naturally without commas or semi-colons. But try and write a clear paragraph without this most basic of punctuation marks. I think even the most creative and skilled writers would struggle.

The humble comma is an unlikely candidate for the greatest punctuation mark, or so you may think.

Which other, however, can render the subtle rhythms of speech with such elegance, such grace? That little flick can make the clumsiest list flow smoothly, or break up overlong sentences with a mysterious pause, like so. Always charged with the promise of another clause, the comma brings hope where other, inferior punctuation marks (., !, ?, etc.) bring misery.

Ellipsis: the sexiest of the punctuation marks

Flirtatious and alluring, the ellipsis leaves you wanting… These three dots say so much by saying nothing at all. A very […] omission. A charged silence. A pensive… pause. Leave it to the imagination, says the ellipsis. There’s nothing pretentious here, no finality or !!! drama — brevity or ??? interrogation. Just a little moment to sit and wonder what could have been. Or what will be…

The best punctuation mark has to be the semi-colon.

I dare not think of any better way to separate my flamboyant shopping list. Not only does the semi-colon hold such a necessary purpose when writing, it is a beauty to hand-write itself. It’s like two-in-one; a full stop and a comma. The satisfaction I get after using a semi-colon is next to none!

How should we write about mental illness?