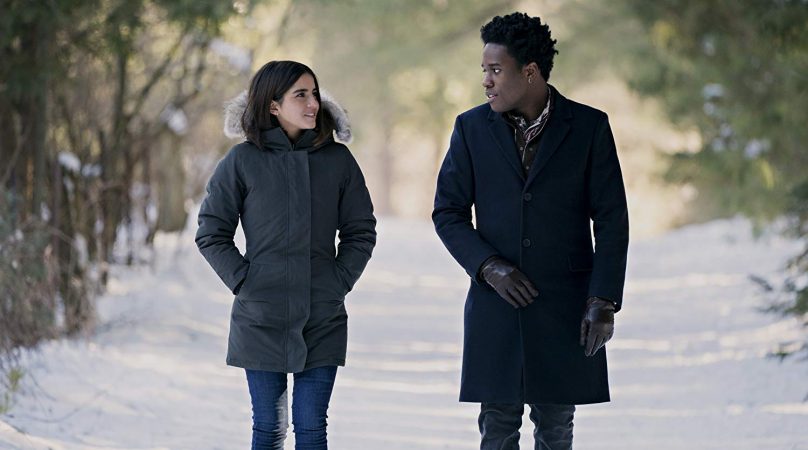 John Green fans, rejoice! After years of silence on the film and tv-front since The Fault in Our Stars broke our hearts all over again after the book, comes the Netflix adaptation of Let It Snow, the book co-written with Maureen Johnson and Lauren Myracle and now directed by Luke Snellin (My Mad Fat Diary, The A Word and Wanderlust).

For non-nerdfighters amongst us, Let It Snow is a young adult novel, following three relationships amidst turmoil of Christmas and the snow. Due to the films abnormally short running time (93 minutes), a lot of this sadly gets cut away, but thankfully not to the detriment of the film itself.

And before you write this off as ‘just another Netflix film’, I have two arguments to make. 1. They got Joan Cusack to drive around in a pick-up truck wearing a tinfoil hat and coat, and 2. There’s actually a lot of important and relevant themes explored here like family illness, sexuality and the impact of social media. They aren’t right at the forefront of the film, but they’re definitely there. Never-mind why Joan Cusack is wearing so much tinfoil.

Thankfully, it also isn’t overloaded with the Christmas music that we’ll all be sick of come mid-December, in fact, one of my favourite scenes is a rendition of The Whole of the Moon by The Waterboys.

You’ll laugh, if you’re anything like me – you’ll cry a lot, and you’ll go out and buy the book the next day, and you’ll want to watch it all over again. It’s a beautiful, if not flawed, portrayal of being young this time of year. We all want to be someone.

We all want to be with someone. Let It Snow reminds us of the beauty in the things and relationships we already have. That whilst meeting their parents for the first time is always, awkward, it’s a lot less so if you all dance around to 100 Years Ago by the Rolling Stones. If anything, it’s less of a Christmas movie, and more a movie about Christmas. But that’s a whole other debate…

About the Author: Harriet Metcalfe


‘tis the season of giving
and all through the n