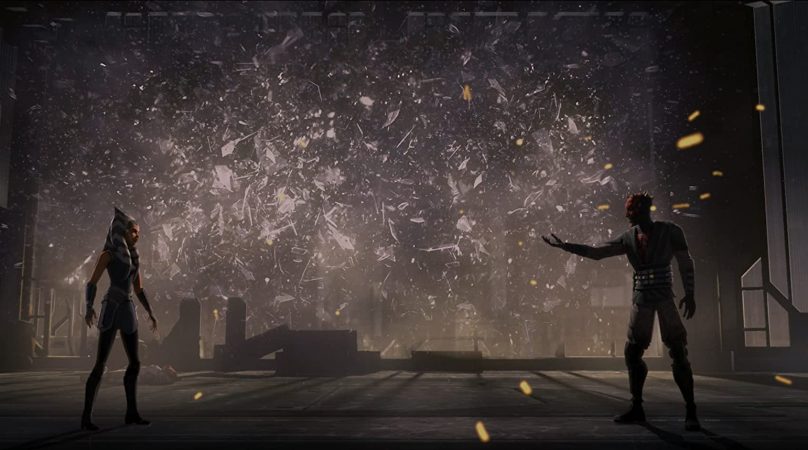 Some people had Harry Potter; others had the Marvel Cinematic Universe. For me, my on-going storyline fandom was Star Wars: The Clone Wars.

Ever since it debuted its feature film, which was undoubtedly a glorified television film pilot in disguise, I have to clung to it for its alternative style of storytelling in the Star Wars universe, opting to showcase the complexities of politics, ethics and war that the prequel trilogy fell short on. Now, a couple of bumpy early seasons and a six-year long cancellation later, the final season of The Clone Wars has finished airing.

Comprised of twelve episodes that are divided equally into three story-arcs, the final season never seems worried that it’s going too slowly for its viewers, (and it is a slow burn). But the pace is a great merit and highlights the self-confidence of the creative team to inch its way towards the climax than to crash and burn halfway through. It’s like a perfectly timed fireworks display, shooting off sparklers that are pretty in themselves, but also enhance the impact of the closing big bang.

The first arc – The Bad Batch – is quite interesting in that unfinished storyboards were released after the series’ cancellation back in 2014. Focusing on Captain Rex and the clone troopers, The Bad Batch is a standard story, bringing a small amount of closure and development to the clones, played with a light-hearted rhythm and brief moments of syncopation. Far from being the most complex storyline, Bad Batch succeeds most in settling the audience for the growing storm.

The ageing is done very well, with the late-teens look feeling very natural and recognisable for the character

The second arc swiftly moves the season’s attention onto Ahsoka, where it will stay until the end. The arc, which as far as I’m aware does not have an official name, is also fairly run-in-the-mill with Ahsoka befriending an engineer on Coruscant’s low-life area – Level 1313. Ahsoka is given an updated look for this season, having visibly grown older since her last appearance on Clone Wars in the season five finale. The ageing is done very well, with the late-teens look feeling very natural and recognisable for the character. Of course, the greatest part of this second arc is how it intersects with the coming climax: The Siege of Mandalore.

The Siege of Mandalore has been thrown about in the Star Wars canon since the original cancellation, even appearing in E.K. Johnston’s Ahsoka (2016) novel, but that depiction has now been retconned by the real-deal. Maul, having escaped the clutches of Darth Sidious, has reclaimed Mandalore. In a last attempt to get back her home world, Bo-Katan enlists Ahsoka’s help to lead a siege.

What sets apart The Siege of Mandalore apart from other arcs in the series is its style. Gone are the morals and parables that fans have associated with the series for its entirety, and instead the episodes begin with “Part I”, “Part II” etc. There is no opening music and the text moves from yellow to red, which has become a staple for Maul’s arcs. However, composer out does himself with his final scores, which set an eery ambience worthy of the climax’s gravity.

The cinematography and art design in The Phantom Apprentice is beyond beautiful, while the discourse between Maul and Ahsoka is equal parts chilling and emotionally shattering.

At this point, I should note that this is not just the end of The Clone Wars series, but an end to the war in the canon, as the arc moves in tangent with Episode III: Revenge of the Sith. As most fans of the franchise know, Anakin’s dark fate is upon the galaxy during this period, and Ahsoka’s perspective on the events of the prequel finale is harrowing. Though before Ahsoka has to deal with Order 66, its her confrontation with Maul that takes centre stage. Without spoiling too much, I will say that the cinematography and art design in The Phantom Apprentice is beyond beautiful, while the discourse between Maul and Ahsoka is equal parts chilling and emotionally shattering.

I’d like to take a moment to discuss The Clone Wars’ own growth in terms of the creative teams. The animation is stunning. If you were to watch the aforementioned pilot film, the difference between the CGI animation would be night and day. What once was blocky and presumably convenient for the animators has transformed into a refined smoothness only outdone by its use of textures; I know what everything feels like in the series by looking at it. Ashley Eckstein (Ahsoka) and Sam Witwer (Maul) also stand out for having the most formidable performances in the franchise, let alone the series. Witwer especially has the definitive portrayal of Maul, speaking in a hushed voice like whispers from a sinister spectre. Meanwhile, Eckstein engages with a more subdued voice for an older and wiser Ahsoka.

For all this talk of philosophies and performances, fans of the series shouldn’t worry about it being low on exhilarating action. Ray Parker, who has portrayed Darth Maul physically throughout the character’s live-action appearances, returns behind the scenes to motion-capture new choreography for his duel with Ahsoka. Parker has not lost his touch in his older years, delivering a duel worthy of Episode I: The Phantom Menace’s iconic theme.

The series has always been built on inevitability; that for all the talk of politics and the ethics of war, the audience is left with the knowledge that none of it matters. The Clone Wars can’t have a happy ending, though the one we get is fuelled with pathos and closure that are sure to content its long-time viewers.

About the Author: Peter Lennon

English Literature undergraduate. Although I primarily write for the Courier's Film section, I do love helping out in the Televsion and Gaming sections as well. I also organise and host livestreams/radio shows as FilmSoc's inaugural Head of Radio. Twitter: @PeterLennon79