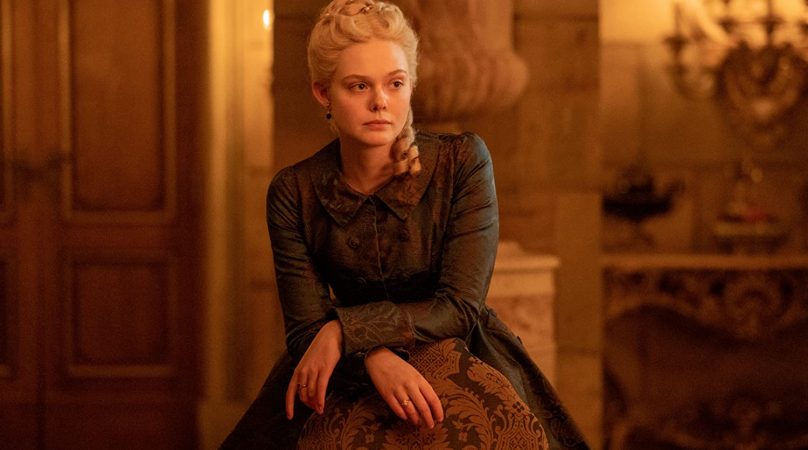 Historical dramas tackling comedy in unforgiving time-periods are rare, which makes Tony McNamara’s newest venture, The Great, into the extraordinary life of Catherine the Great, Russia’s longest raining woman, is an impressive example of genre-bending storytelling.

In the American streaming series the Prussia born Princess is devasted to discover that, upon meeting her soon to be husband, her dreams of a timeless love story will not unfold as planned as he turns out to be a rather ruthless and unconjurable character. Truly the series does him a disservice by portraying the very worst of the guy. There the series follows Catherine’s internal battle in sacrificing her happiness within this loveless marriage and second class treatment of womanhood, alongside her dream of saving the country she believes will soon be in ruin.

As can be discerned from her namesake, Catherine the Great went on to become a beloved leader and a formidable force in assuring Russia’s succession as one of Europe and Asia’s great powers. However, to attain such a place Catherine took a rather unconventional course of action, which, as unimaginable as it may seem, is documented in the series within a portrayal of fact and fiction.

The series weaves together real events with the inclusion of unrealistic plot points so seamlessly, they’re impossible to separate

For history buffs, the series will likely leave you scratching your head in wonder at the new rendition of Catherine’s rise to greatness. However, being that The Great’s dedication to historical accuracy is difficult to discern from some of the sheer ludicrous antics that occur-a quality that makes the series so entirely original and enthralling to watch- it will likely not draw the average viewers’ attention very often.

The anti-historical approach does not quarrel at the absurdity of Catherine’s story but rather leans into it and adds to the unfathomable actions that occurred with some of its own in a way that hasn’t been done before. The series weaves together real events with the inclusion of unrealistic plot points so seamlessly, they’re impossible to separate.

Whilst some will be entirely appalled at the reimaging of Peter III as a dim-witted, egotistical tyrant, Nicholas Hoult’s rendition of the short-lived leader makes the royal both loathable and lovable. Hoult’s ability to capture the immaturity of a spoiled rich brat that somehow also manages to appear deprived of an educational figure and proper role model you long to remedy makes his performance another impressive show of Hoult’s acting abilities ready for his resumé.

Equally as wonderful a character is Catherine; while Elle’s experience with the youthful timid and beautiful persona is well established in Hollywood film Fanning manages to appear as the feminist figure we didn’t know we needed. Catherine’s development from girl to a woman as she considers the importance of romantic attachments in her life whilst balancing her need to establish a better future for Russia is entirely transformative to watch. Fanning captures the relatability of maturity and first love despite Catherine’s tale undeniably interlinked with an entire countries future – the feelings can be whittled down to such understandable and relatable values.  Throughout the series, Catherine had to fight for her country in a time when women were so easily looked over against her youthful desires for love and acceptance that could cost her so much.

Much like Catherine II and Peter’s III impressive rendition of two notorious Russian royals is the extended cast who had preformed equally impressive acting roles. All shined bright on the little screen as they tackled their new versions of known historical figures in history with no dip in acting department.

The buzz around the series often followed with comparisons between McNamara’s last dive into a reimagined history in 2018 Oscar award-winning film The Favourite-which also added comedy to a time without much of it. However, while many described The Great as the television equivalent, I would consider it superior, mainly because of its more ostensions dive into the intended genre and tropes.

While both are supposed drama/comedies The Favourite isn’t laugh-out-loud funny while The Great is. Equally as important is the dramatization of the story itself, The Great most definitely takes it more than one step further than The Favourite. However, what may be the biggest differences is The Great’s move to modernise the story? Done before in Netflix’s series Reign, The Great features modern music, in the end credits to summarise the episode. McNamara also makes the move to modernise the clothing department with bold fuchsia pink gowns and hairpieces worn purposefully wrong. The show also makes itself keenly aware of the ridiculousness of its antics, in what is ‘An Occasionally True Story’, not shying away from blending real and fake for comedic value. The true qualities of what makes the show entirely original and stupidly brilliant.

The Great ventures where many will not venture to go, taking the absurdity of Catherine the Great’s story and making it entertaining for every audience member. Somehow done in a way that doesn’t take value from this time in history but instead adds a melodramatic flavour that makes it one of the wildest and yet somehow most wonderful TV experiences to be had in 2020. Huzzah!

Killing Eve season finale: ‘Are You Leading, or Am I?’

Pride 2020: LGBTQ+ people behind the screen