Review: The Trial of The Chicago Seven (15) 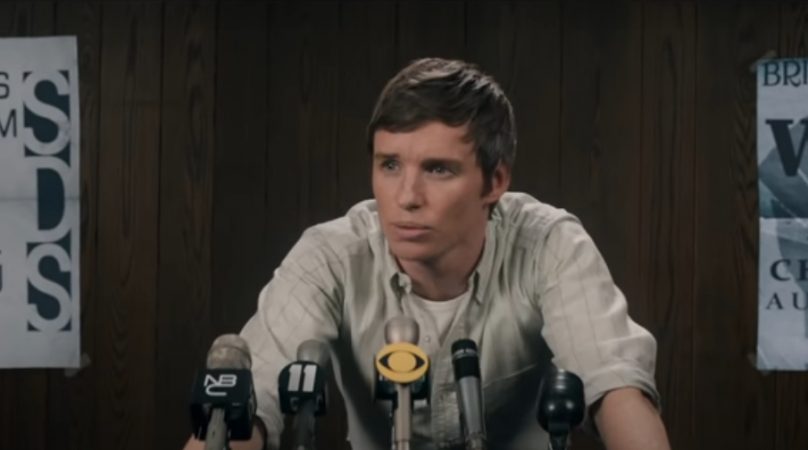 Prolific screenwriter Aaron Sorkin returns to the courtroom drama for his second directorial effort, The Trial of the Chicago Seven (2020) which recreates the 1969 case involving the arrest of anti-Vietnam protestors charged with initiating citywide violence.

Although featuring well-executed reconstructions of the clashes between police and protestors the film is mostly concerned with the battleground of the courtroom as the seven are subjected to not only the prosecution but the formidable prejudice of Judge Hoffman (Frank Langella). The treatment of the eighth defendant, Black Panther Bobby Seale (Yahya Abdul-Mateen II), is particularly frustrating as he is denied his constitutional right to represent himself and is literally silenced before the jury in the film’s most memorable and harrowing scene.

Featuring Sorkin’s typical brand of acerbic, combative exchanges the dialogue here is expectedly excellent, providing the film with constant propulsion and delivered by a committed ensemble cast. Baron Cohen is particularly watchable in an anarchic role that could have easily slipped into one-dimensionality and he effectively spars with Redmayne’s Tom Hayden.

Hayden laments that the acceptance of progressive politics is undermined by Hoffman and his “idiot followers passing out daisies to soldiers and trying to levitate the Pentagon”. These confrontations permit an interesting investigation into the nature of protest however with such a broad gallery of characters the film is unable to utilize many of them to the same extent.

Where the film falters is in its narrow scope as Sorkin’s fascination with courtroom theatrics leave little space for character development and thematic depth. The parallels to today’s political turbulence and conservative authoritarianism are on paper ripe for exploration yet the film regrettably sacrifices this in favour of witty verbal contest. Perhaps a more disciplined and story-focused director such as David Fincher would have translated Sorkin’s script into a more narratively impactful and weighty film as he previously did in The Social Network (2010).

In his enthusiasm to capture as many of the players involved as possible Sorkin forgoes the opportunity to include impactful character arcs to ground the legal and political complexity with a human story, unlike earlier work such as A Few Good Men (1992). In that iconic film the courtroom fireworks and legal jousting is matched with the development of lawyer Lieutenant Kaffee (Tom Cruise) who grows from smug “ambulance chaser with a rank” to respected defender in line with his legendary father. Whilst admittedly a more classical and expected approach the lack of a similar character-focus in The Trial of The Chicago Seven result in a film that although compelling largely lacks emotional investment.

Additionally, one of the most interesting elements of the case, namely the political motivation to target the Black Panther movement, is curiously side-lined despite being an opportunity for engaging with contemporary concerns surrounding equal rights. Whilst the film does not completely abandon this facet, with Sorkin displaying the mistreatment of Bobby Seale and other Black Panther members with convincing gravitas, there is a lack of sufficient running time and consideration to make a lasting impression. Instead of streamlining such complexities the story itself would have benefitted from a mini-series treatment to expand and develop such components beyond what is merely superficial in feature-length form.

The Trial of the Chicago Seven (2020) is an entertaining and engaging film, but the subject matter however demanded more.

Looking back at Peeping Tom