Tiyanna Mistry looks into the Indian farmer's strike and offers a gutting account of the conflict.

The Punjabi farmer is the backbone of the Indian community. They are the underpaid, overworked caretaker of humanity. Without them where would we be? Think about it. Your tea, herbs, spices, textiles, grains, and rice are all grown by farmers. Right now, these farmers (known as ‘kisaans’ in Punjabi) that grow our food are under attack. Their livelihoods are at stake and the world is only waking up to this now.

Right this minute, the largest labour protest in history is occurring in India. Across India, a united front of farmer unions, Samyukt Kisan Morcha have been tirelessly protesting for several months against three farm acts pushed through by the Narendra Modi led 'National Democratic Alliance' in September of 2020. These laws include privatising agriculture and the monopolization of small farmers to large corporations, rescinding farmers’ rights, stripping them of their land and their livelihoods. Several farmers have resorted to selling their land and 260 have sadly taken their own lives. The laws were pushed through without consultation from any farming organisations and removed minimum support prices (MSP); it seems democracy is a concept that the Modi government has failed to comprehend.

The government response to millions of protesters marching in solidarity alongside the Sikh farmers has been anything but considerate. The Modi government in India have acted inhumanely in response to the brewing of popular dissension. They have cut off internet access in several districts surrounding Delhi, detained and arrested journalists, cut off water, food supplies, and access to facilities at protest borders. These actions infringe on the basic human rights of peaceful protestors. Even worse are the actions of authorities who have illegally arrested, abducted, beaten, and tortured protestors using tear gas and water cannons, ordered by the Indian government. These actions resemble those of a dictatorship.

Contrary to the narrative of the Indian media, these protestors aren't just angry male farmers or ‘terrorists’, this protest involves tens of thousands of participating women from the heartland of Punjab. In early December, 250 million went on strike, making it the largest in human history. Not to mention, there is a considerable amount of Dalit women involved, helping to provide food and care for others. Dalit women have long been targets of caste-based discrimination in India, enduring abuse from authorities, yet they continue to persevere. Many women have set up ‘langar’ which are free kitchens for all – regardless of caste or social class. These women exemplify the resilient defiance and altruism of the Punjab which is a thing to behold. Despite their kind-heartedness, the brutality inflicted upon these women has been especially vicious and cold-blooded during this protest. On January 12th, 2021, authorities illegally arrested a 23-year-old Dalit woman named Nodeep Kaur at the Singhu border for her peaceful activism. Whilst in detainment Kaur has been subject to physical and sexual assault; she is just one of many protestors who have faced cruel practices under the BJP regime.

Now, The world is finally watching. We are witnessing devastation unfold and finally, public figures have begun to come out in support of the strike, garnering awareness. Just recently, Rihanna, Greta Thunberg, and Meena Harris have used their platform to bring attention to the grave injustices the kisaans are facing. Even though Modi retaliating tweets have spurred Bollywood celebrities to rally against supporters of the farmers' protest, claiming it as ‘propaganda’, the world is finally seeing Modi’s polarisation of India. He is marginalising working-class farmers whilst the rich live lavish lives from the comfort of their mansions. But this revolution is about more than money. At it's core, this is about real people fighting for their land, for survival and to feed their families. Even in the face of oppression, Sikh farmers have been selfless, offering local communities and protestors medical care, meals, and menstrual products. These farmers continually recognise and acknowledge the fundamental human rights of every individual. Let’s hope the Indian government learn to do the same.

This is no longer just a fight by farmers or the South Asian diaspora but a fight for humanity! This is a fight against a corrosive government who put profits before people. This is a fight to save the kisaan and the world is watching.

Poembox: About more than body 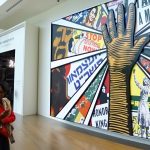 The connection between Human Rights and Art

How well do the fashion and beauty industries represent minority groups?

What I want white students to understand, as a 'BAME' student

Poembox: Where do you belong?
Copy link
CopyCopied
Powered by Social Snap