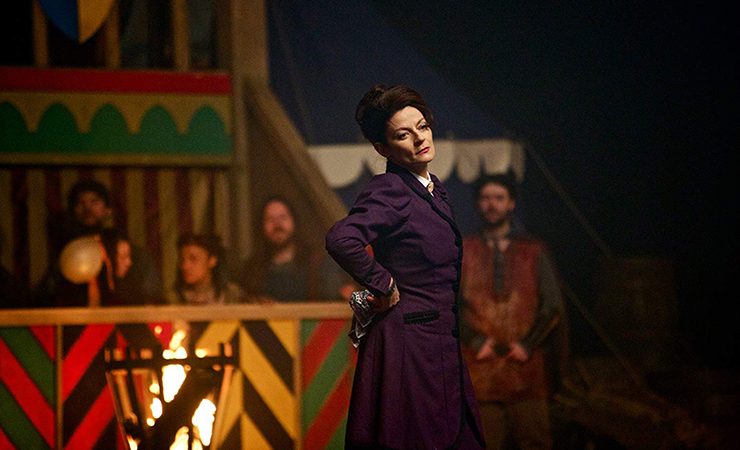 Most TV shows follow a protagonist developing and dealing with problems over the course of the season. But who creates these problems? The villains. The antagonists. The bad guy. So of course, a big part of a show’s success is how good the antagonist is, whether we love them or hate them. Here are some of the best villains, and a few antiheroes, who accomplish just that.

In the early days of Marvel-Netflix shows like Daredevil and Jessica Jones, many were expecting more of what the MCU was producing at the time with a family-friendly tone, jokes, and mostly mediocre villains. However, this couldn’t be further from the truth. While Vincent D’onofrio’s performance as Kingpin in Daredevil is brilliant, I find David Tennant’s terrifying portrayal of Kilgrave from Jessica Jones to be one of the best villains to grace the small screen. The slow, almost seductive way in which Tennant delivers his lines makes your skin crawl, especially given the power of a villain like Kilgrave who can make anyone do anything he wants, just by speaking. (Spoiler warning!) Even past his death at the end of season one, his presence is very clear in later seasons due to Jessica’s trauma. His signature colour, purple, has become so unanimous with his character that whenever the colour appears on the screen, the same dread can be felt. David Tennant gave such a brilliant performance and is the main reason Jessica Jones season one is one of my favourite shows.

When trying to choose which incarnation of the Doctor’s arch-foe is the best, it is absolutely subjective. While John Simm’s over the top performance was amazing to watch, I felt Michelle Gomez did something with the character that made her so much more engaging. From a shocking first appearance that no one expected, all the way to her final scene, the Mistress was definitely one of the main highlights of Peter Capaldi’s run as the Doctor, with it being unknown if in one episode she’ll help or oppose him. Gomez’s great acting and charisma showed that it was definitely possible for male dominated roles to be successfully taken over by women, and thus opened the door for people like Jodie Whittaker who is the current Doctor.

Walter’s descent to evil makes him stand out from the rest.

Starting off with pure intentions of providing for his family once he dies, Breaking Bad shows the gradual collapse of morals in the high school teacher Walter White as he becomes the bad guy himself, Heisenberg. Played spectacularly by Bryan Cranston, Walter White’s transition is a subtle one thanks to smart writing with his actions being somewhat redeemable up until the point they aren’t and we are shocked at the things he has now done. It’s interesting to go back after finishing all 5 seasons to see really how much the character has changed, both appearance and personality wise. Of course, Breaking Bad has many other iconic villains like Tuco or Gus but Walter’s descent to evil is what makes him stand out from the rest.

The first season of Heroes remains my favourite thanks to its interesting plot, clever world-building and an intense villain in Sylar. A superpowered serial killer who hunted down other superpowered individuals for their powers, Sylar, played by Zachary Quinto, was a force to be reckoned with as the primary antagonist of the first season. Whenever he was on screen you genuinely feared for what would happen to the heroes, thanks to his calm yet sinister personality. While the later seasons certainly dropped in quality, Sylar continued to be one of the highlights of the show, be it as a recurring villain or antihero helping the protagonists.

Dr Doofenshmirtz while an entertaining villain is also a victim of a broken home and poor parenting.

An iconic villain from many of our childhoods who we loved to see fail each episode thanks to a pesky platypus is actually more sympathetic and relatable the older we get. At the start of Phineas and Ferb, Dr Doofenshmirtz just seemed like a generic mad scientist with wacky over the top inventions for conquering the world. But as the show progressed, we learn more about his tragic, and hilarious, back story and as a result, made us feel more for the character and some of his schemes. From his own parents not attending his birth to being a gnome for most of his childhood, Dr Doofenshmirtz while an entertaining villain is also a victim of a broken home and poor parenting.

Second base for Sex Education


Sub-editor Applications are now open for the 2020/