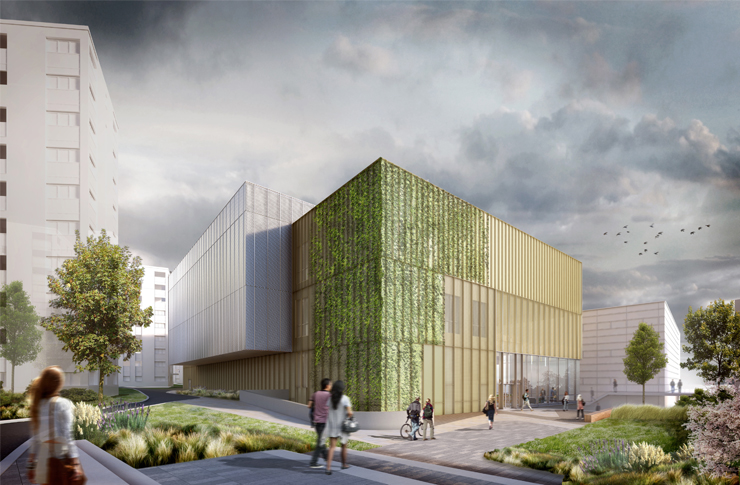 Over the next two years the University’s sports facilities are set to be transformed in a £30 million project. A major extension to the Sports Centre and a complete overhaul of the facilities at Cochrane Park aims to improve and expand the opportunities for students to take part in sport.
That the University values sport is demonstrated by Newcastle’s perennial aim to rank in the top ten universities in the BUCS league, combined with an increasing focus on participation programmes such as Inclusive Newcastle, Intra Mural sport and Give it a Go.
The provision of these kinds of activities, however, is constrained by the limited space available in the current Sports Centre. The number of students wanting to participate in sport has increased substantially since the Centre opened in 2005, and the University’s sports facilities are now severely over capacity.

Dr Phil Ansell, the University’s Dean of Sport, is part of the team overseeing the project.
“The development of the University sports facilities will play a key part in the implementation of the recently approved University Sport Strategy. One of the overarching themes of the strategy is that of an excellent sporting experience for all. The new facilities will provide students from all backgrounds and at all ability levels with more opportunities to participate in their chosen sport during their time at Newcastle University”
The University is keen to hear the views of students on the current plans. The Athletic Union and student focus groups have been involved throughout the project, but now the University is holding consultation events in the Planning Room throughout November to hear feedback from the wider student population.

Alongside the new Park View student accommodation, the former Ricky Road site will be home to a new wing of the Sports Centre, due to open in September 2019.
The extension will more than double to size of the Sports Centre, with the two parts accessed via a high level link bridge, enabling both buildings to operate as one Sports Centre. The new building will house an eight-court sports hall with viewing gallery and four squash courts to replace the ones demolished with Ricky Road in 2016.
The new Sports and Exercise Science degree programme, which welcomed its first intake this September, will also relocate to the new building, which will also include social spaces and a student common room in a bid to make the building more inviting to students.

Plans for the new building will be displayed in the Students’ Union, and the Sports Centre are welcoming feedback from students

Once the extension is completed the existing building will be renovated to include a much larger gym, with its current 120 stations increased to 200. The offices currently located on the ground floor will also be turned into multi-purpose activity spaces for students, with the administrative areas moved into the extension.
The additional sports hall and increased activity spaces will allow a greater proportion of University clubs to play fixtures in the Sports Centre, while also making it easier for students to hire spaces for casual use. The aim of the redevelopment project is to increase capacity to accommodate all of the current activities in the Sports Centre but also leave room for further expansion in the future.
A project of this size will inevitably lead to a temporary loss of facilities, but the University are working to ensure that most of the work happens during the quietest times of the year. “Our ambition is to minimise disruption,” explained Ansell, pointing to the current work at the Marjorie Robinson Library Rooms as an example of phased redevelopment that keeps as many areas open to students as much as possible. Construction is due to start in January 2018, but the existing Sports Centre will remain open until much later in the project timeline.

The extension will be linked to the existing Sports Centre via a footbridge, creating one unified building. Image: Newcastle University

The University has developed the proposals in partnership with the Athletic Union and student focus groups in an attempt to make the new facilities fit student demands as closely as possible. Discussions over a possible expansion of Newcastle’s sporting facilities began as early as 2014, with students involved throughout the process.
While the basic structure and layout of the extension has now been finalised, attention is now turning to the internal fittings and facilities, and the development team is keen to hear student views. Plans for the new building will be displayed in the Planning Room in the Students’ Union, and the Sports Centre are welcoming feedback from students – both those who currently use the sports facilities and those who don’t – via social media and email as well.

Generations of Newcastle students have used the University’s facilities at Cochrane Park, but these are also now set to be renewed. The proposals include replacing three grass pitches with multi-purpose artificial ones, which will accommodate more intensive playing schedules. All three artificial pitches will also be floodlit.
The existing cricket pitch is set to be relocated, while the pavilion will be extensively renovated and extended to provide more changing rooms, specialist training facilities and a new social space for students and spectators.
The University is in the process of seeking planning permission for these proposals, but the plans as they currently stand are available to view in the Activities corridor of the Students’ Union.

As well as extensive consultation with students, the University has been working with local residents, community groups and sporting organisations such as the FA, ECB and Sport England to ensure the facilitie

s at Cochrane Park meet national standards and can be used to support community engagement projects. At present the pressures of fitting student fixtures onto the Cochrane Park pitches leaves little room for local youth teams and the University’s other community partners.
Increasing the capacity at Cochrane Park will allow more of the University’s own teams to use the facilities as well. This will save the Sports Centre and AU clubs money that is currently used hiring out external pitches and the transport and time costs associated with this.
Ansell added that hosting more matches internally could lead sports clubs to feel a greater sense of inclusion and recognition. “Students told us that it’s beneficial of doing sport on a University-owned pitch,” he explained. “You feel more a part of the University.”
The redevelopment of Cochrane Park’s sporting facilities coincides with the demolition of Henderson Hall’s ‘New’ Hall, which provided student accommodation until its closure in 2014.
Although the plans are yet to be formally approved the actual work required is relatively quick, meaning that the new-look Cochrane Park should be open to students from September 2018.

Toon comeback not enough against Birmingham