Shadow of the Colossus is a game with a simple story. But it is a story simple enough to be able to touch upon themes of love and adoration, of hubris and corruption, of nature and destruction, and is able to do so in one of the most beautiful environments ever created for a game. Its ability to do this has cemented it as one of the most popular and influential games in modern gaming history, bringing a completely new and unexampled gaming experience to a whole generation of gamers.

So, the idea of remastering the masterpiece has unsurprisingly become a popular one, and the overall result has far exceeded anyone’s expectations. Unlike the PS3 remastering – a simple touch up of quality with no huge improvement – the remaster for the PS4 has been a project essentially rebuilding the game from the ground up, elevating the game into the next-gen era. What results is possibly the most gorgeous game I’ve ever played.

Firstly, however, let us talk about the story. A young man, ‘Wander’, enters a cursed land on a horse accompanied only by a dead girl. He takes her to a temple, places her on the altar, and hears a mysterious and indistinct voice. Before long he has bargained with this voice. If he travels through the cursed land and destroys its 16 inhabitants – the monstrous but beautiful colossi of the title – the girl will be given life again. With only his faithful horse, his sword and a bow and arrow, he sets off on this trial. 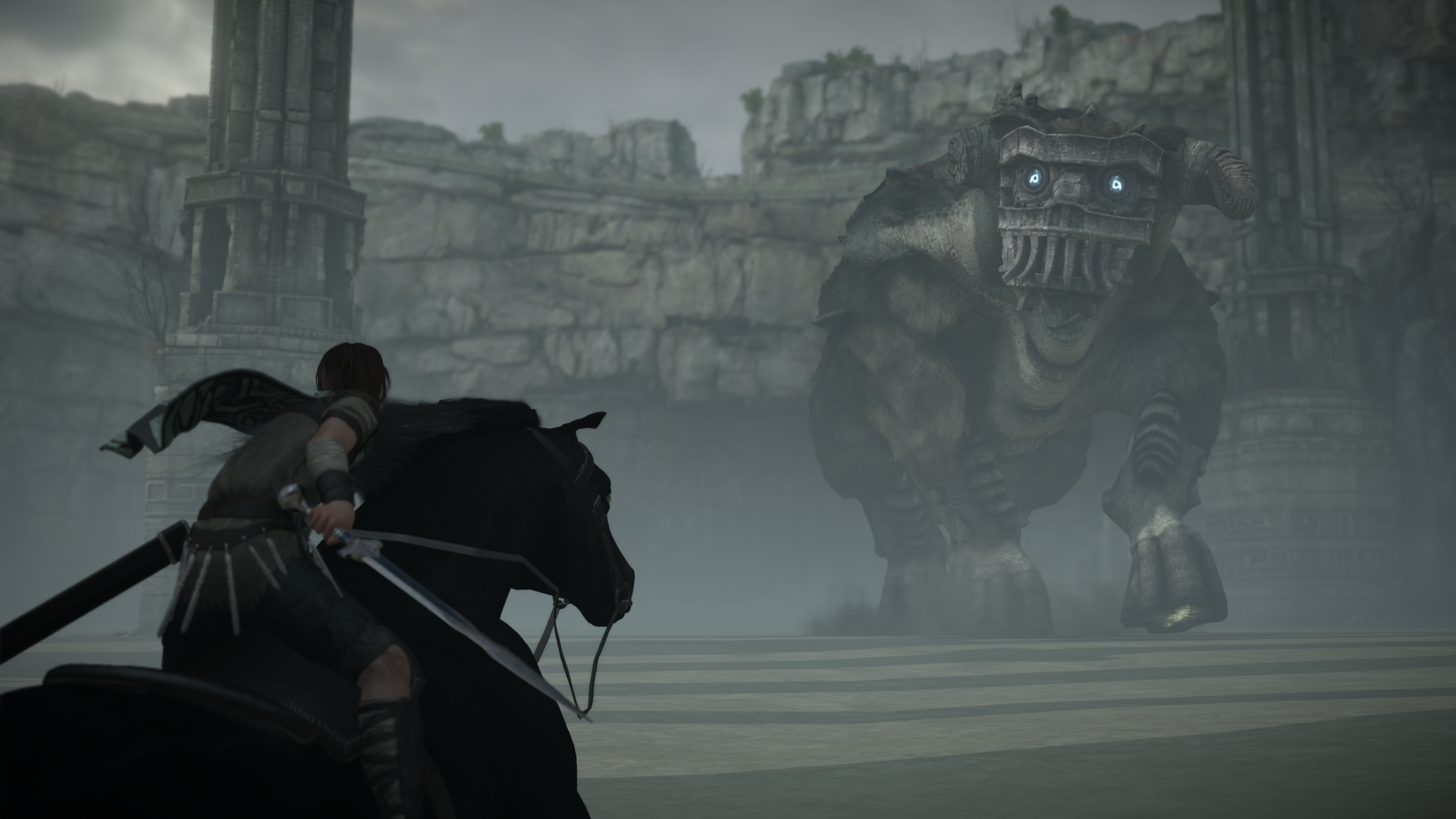 The original creator of the game, Fumito Ueda, is a firm believer in the minimalist approach to art. Scrape away the inessentials and the meretricious and when you finally reach the core of things that’s where real emotional development takes place. This is the rule of thumb for the entire game, from plot to environment to gameplay, and in the remastered version this is essentially unchanged.

But there is something about the remastering which allows this rule to reach new levels. As beautiful as the scenery is, its sparseness is only emphasised. As detailed as the mountains and waterfalls are, it only highlights your distance from them.

Personally, I find that the game is pretty much what I expected from its legendary status, but I won’t lie and say I didn’t rage over its infuriating controls

The idea, then, that Wander is isolating himself from nature by destroying these colossi is something much more observable in this version. But there are critics, otherwise known as ‘purists’, who believe that the sharpness and detail detracts from the original atmosphere of the game. The damp and flooding light that is so prevalent in the original is almost non-existent here, and the general haziness of the game has been replaced with a fine attention to detail. One wonders, however, whether this saturation of light and haziness is really necessary in a game where the minutiae of a world can be worked over in such intense detail.

Personally, I find that the game is pretty much what I expected from its legendary status, but I won’t lie and say I didn’t rage over its infuriating controls. At times your faithful horse can be your real enemy, and in some respects the ease of fluid control mechanics have been sacrificed for cinematic effect. But then again, the satisfaction of overcoming the controls and finally killing your enemy, when mixed with the sadness of the actual monster’s death, is one of the most important aspects of the game.

A finer flavour of the film world?

The Shape of Water (15) Review

Memorials and Tributes in Video Games

Should we publish posthumously?

Review: An Evening with an Immigrant
Copy link
CopyCopied
Powered by Social Snap