In a medium where the term has become indelibly associated with lazy writing, you can imagine my consternation when LISA: The Painful RPG gave me a ‘moral choice’ about fifteen minutes in. Blithely trekking the wasteland of Olathe, rendered lifeless, lawless and without women since an apocalyptic event named the Great White Flash, my player character – Brad – was ambushed by an old childhood bully. There, I was given the choice to either hand over all my items, equipment and magazines – the game’s currency – or he’d kill the only party member I had, self-proclaimed “Lord of the Tutorial” Terry Hintz.

Terry was, frankly, useless. He hit for quite literally zero damage in combat, could only use a terrible healing skill and wore a really gross-looking leopard-print shirt. He had forced his way into my party for pretty spurious reasons, and kept on interrupting me with vaguely desperate dialogue. To recruit him, I’d had to kill a pathetically weak dog named Cheese Legs.

Would the game actually permanently kill one of my partners so early?

Meanwhile, I’d amassed a sizeable collection of mags, healing jerky and perfume, and a sweet poison-causing knife. Was this idiot really worth losing all of these good items in a game that so emphasised survival? And would the game actually permanently kill one of my party members so early? Dropping to 0 HP so far had only knocked characters unconscious, after all.

So I called their bluff, and to my surprise Terry Hintz was indeed taken off-screen, never to be returned.

I was playing with one character now, and the implications hit hard. Turns out Terry wasn’t as useless as I’d thought. The game would end if I fell in battle, rendering all my reviving perfumes pointless. I had my sweet knife, but Brad, being a bare-knuckle fighter, couldn’t equip it. 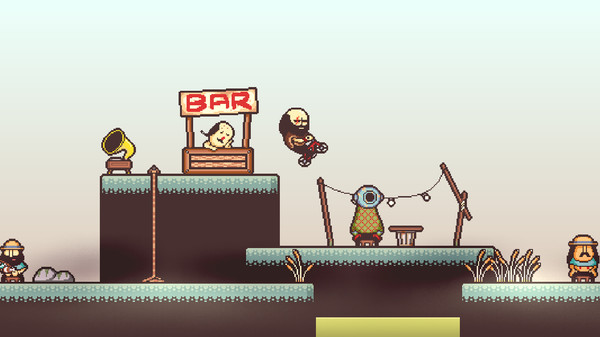 When I saw the corpses of those Columbo’s gang had trampled through the guilt finally got to me and I took the coward’s way out: reloading my file, making the opposite choice. Even as my guilt was soothed, progression was no cakewalk. Without any jerky for healing or mags to buy more, even casual battles were staggeringly dangerous. I was struck by just how different the fight against Hoops Jardeen and his allies became with Terry but without food.

This is why I keep on returning to LISA: the way in which its choices change the game around them. It wasn’t a Telltale choice, little more than a well-dressed illusion. It wasn’t a Fallout choice, remedied by punching a puppy or giving water to a beggar. It wasn’t a Mass Effect choice, where all I chose was what flavour of ice cream I wanted in my ending slideshow. It was a choice that affected how I played, changing the very structure of the game around it. It stuck the knife in my bleeding-heart morality and twisted it in as Oak Tree Steve destroyed me in combat.

Rooster Coleman’s house is empty. I’m not sure if I can recruit him next run after what I did to him.