I was a huge fan of the first Resi Revelations. It was my first real foray into survival horror and it turned out to be the perfect introduction; this was one of the rare games on the 3DS where the 3D effect really shone, emphasising the cramped, claustrophobic atmosphere of the zombie-infested cruise ship you spend most of the game on.

With that in mind, and having recently got myself a PS4 at long last, I decided to grab myself a copy of the second entry in the spinoff series. While not a direct sequel, it carries much of the same DNA as its predecessor; as in the first Revelations, the story follows two separate pairs of protagonists who navigate the same setting in their search for answers (and each other). The story centres on series veteran Claire Redfield and her partner Moira Burton in one half of the game, having been kidnapped, injected with a virus which mutates its host if they get too scared and trapped on a mysterious island crawling with gruesome science experiments. The other half follows Moira’s father Barry, another classic character from the Resis of old, and a young girl called Natalia who he meets on his mission to rescue Moira. 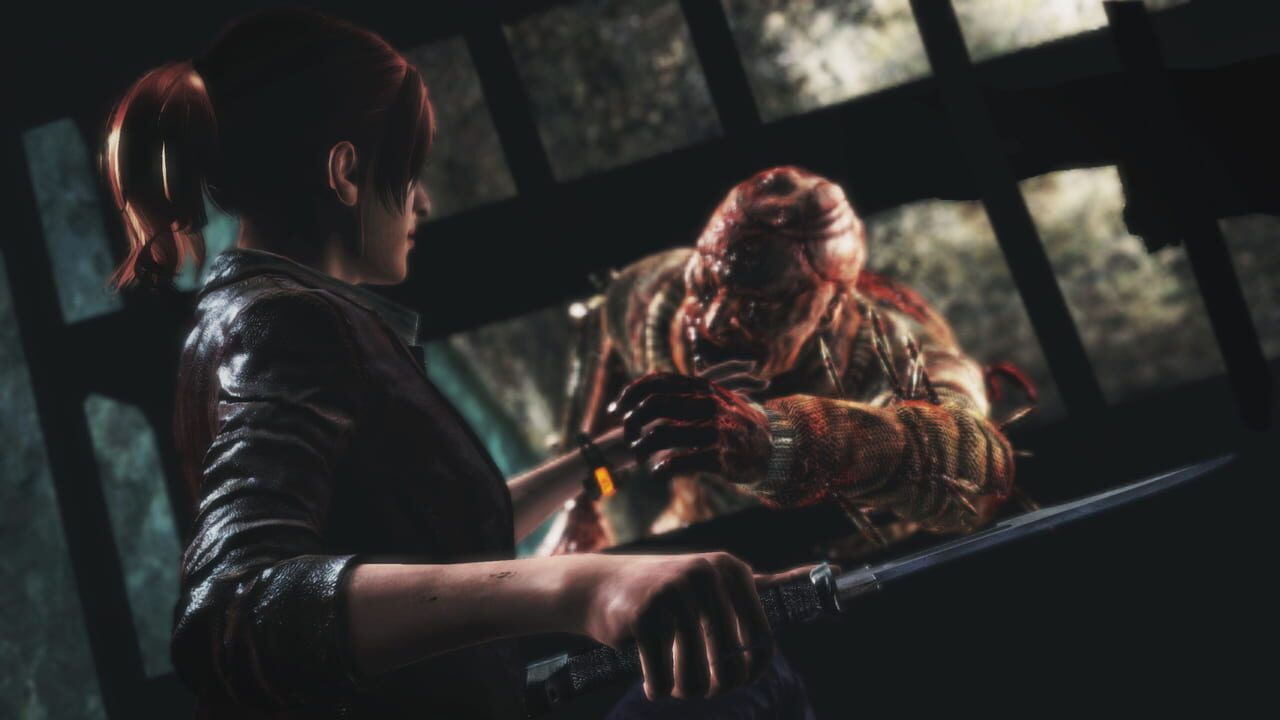 The game's zombies are wonderfully grotesque in their design - it's hard to look at them and not shudder a bit (image: igdb.com)

The main difference this time around is that you get to control both of the characters in each pair to make use of their different skills. Claire and Barry function as your usual gun-toting zombie-slayers, but Moira and Natalia handle a little differently. Moira refuses to use guns due to some past trauma so instead uses a torch to blind enemies, giving Claire the chance to get an easy headshot in, and a crowbar to finish downed enemies with a hefty thwack to the noggin. She can also find hidden items with her torch and pick locks on supply boxes. Natalia, meanwhile, has some sort of ESP ability which allows her to see enemies through walls and pinpoint their weak spots for Barry to give a good blasting. Being much smaller than Barry, she can also crawl into small spaces inaccessible to him, and like Moira can execute a finisher on downed enemies with her handy brick.

This adds more depth to the simpler formula of the original Revelations, but more importantly it opens up the opportunity for split screen co-op. This is a mixed blessing: while it’s great fun and cuts out some of the fiddliness of switching between characters in single player, it definitely dilutes the tense atmosphere due to the sheer amount of dicking around it allows.

While the co-op is undeniably great fun, it takes a lot away from the creeping tension that the first game built up so well

In the course of the first chapter me and my flatmate pushed each other into flamethrowers and spinning blades of death, repeatedly threw bricks at each other and melodramatically re-enacted the ending from Of Mice and Men. We couldn’t stop laughing at the start of the Barry/Natalia half because of just how unbalanced the two are; as Barry, I had a small arsenal of beefy firearms to blast zombies to pieces with, while my flatmate’s only ability as Natalia was, at that point, to point at enemies and say “There’s a monster” (which he did *constantly*). While this is undeniably great fun, it takes a lot away from the creeping tension that the first game built up so well.

Still, so far it ticks many of the boxes that made the first Revelations so great. The story’s already thrown up a couple of plot twists on the same level as the first game’s “second ship” stinger, the environments are great (a lot more varied than the cruise ship of the original) and the enemy design is brilliantly grotesque. Then there's the return of the brilliant Raid mode which rejigs the main game's locales into a fantastic arcade shooter with RPG-esque character growth and loadouts (and again, supporting some brilliantly fun split-screen multiplayer). It’s a shame the co-op dilutes the atmosphere of the story mode somewhat, but in fairness it's completely optional so horror purists can still get their scares properly if they want to. All in all, Revelations 2 is well worth a go for survival horror fans.