Out of all the games expected to be announced for the 3DS, a port of the original Luigi’s Mansion was not high up on most people’s predictions. That said, after the big success of Luigi’s Mansion: Dark Moon on 3DS in 2013, it’s remarkable that this port didn’t come sooner. However, with the original known as somewhat of a technical tour de force, can the 3DS version do this GameCube classic justice?

To be adapted for play on the handheld, the game has gone through a few minor changes, some positive, some negative. The good news is that the original game remains fully intact, with the mansion layout, placement of all items, ghosts and characters completely unaltered. Some have even gone to the lengths of recreating the trailer for the new version with recordings from the original, which just goes to show that they line up correctly. Even Toad is still faithfully standing in his corner of the foyer, indicating that there is no new save system and players still need to speak to him to record progress.

Additional enhancements have also been applied - the map is now permanently visible on the 3DS’s touchscreen and now sports a sprite-based redesign. As a bonus, this is generally more in keeping with the technology of Luigi’s Game Boy Horror than the 3D view from the original. Like before, the map makes it clear which doors are locked, though a new addition is that it now tracks Luigi’s location in real-time. The view on the touchscreen can also be altered to show the items collected as well as ghosts captured. 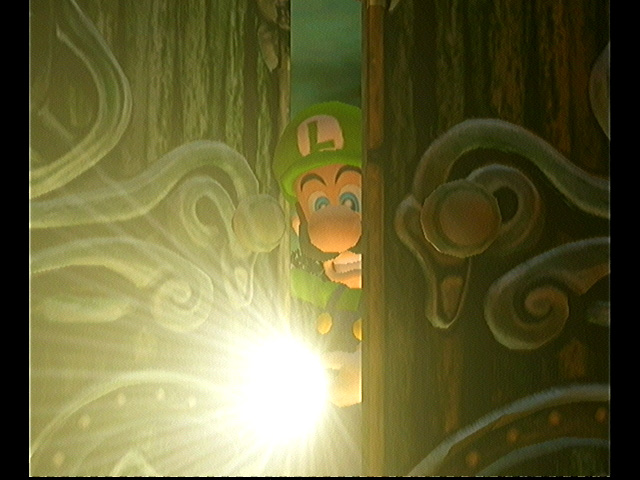 Graphical improvements in some areas are present too, including an updated character model for Luigi. Considering the original game was his first main 3D appearance, the modern version of his character used in Dark Moon is much more in line with modern graphical standards. Extra detail is also present in other aspects of the game. For example, there are more trees present outside the mansion, as well as a more menacing gate and a dilapidated ground texture. Regarding lighting, the general state of it has improved. Bloom, lens flares and a higher number of light sources per scene all contribute to a richer looking environment. On top of this, the rooms now look slightly brighter which will alleviate some of the glare and reflections from the 3DS’s screen. On the gameplay side of things, a new boss rush mode has been added that allows players to speedrun battles against the core spectres from across the game.

The drawbacks come primarily from the control setup, in which the GameCube layout of two sticks, one to control movement and the other to aim the Poltergust (Luigi’s trusty ghost-capturing vacuum cleaner) has required alteration. Considering the original 3DS models only have one circle pad, movement is now paired together with aiming, as was also the case in Dark Moon. For this reason, Luigi is locked into a strafe when using the Poltergust. This worked well enough in Dark Moon so shouldn’t pose too much of an issue in the port. The GameCube controller's analogue triggers are also absent on 3DS, meaning that the Poltergust lacks the variable control found in the original and is instead fixed at full power. Thankfully, this shouldn't affect gameplay - it always felt more of a gimmick on the GameCube rather than an essential function. And, just like with the alterations to the stick setup, this caused no issues in Dark Moon.

[pullquote]The bloom and transparency used to give ghosts their spectral appearance has been dialled down significantly. Instead, they bear a closer resemblance to plasticine than presences from the great beyond[/pullquote]

And while some of the graphical features have seen improvement, the hardware of the 3DS is very different to the GameCube, meaning cutbacks in other areas are par for the course. The most prominent of these is a substantially lower rendering resolution, though this is likely to be hidden well by the smaller screen of the 3DS.

Additionally, the bloom and transparency used to give ghosts their spectral appearance has been dialled down significantly. Instead, they bear a closer resemblance to plasticine than presences from the great beyond. The flashlight used to stun these ghosts has seen reductions to the graphical quality of the beam too, with just two yellow cones used to visualise the rays coming from the bulb.

On a similar note, there are no specs of dust visible in the beam of the flashlight. This effect really added something to the Scooby Doo style of spooky atmosphere present in the original, so like many of the changes, it’s a shame it hasn't made it into the 3DS version. That said, the game isn't due out until later this year, so there's every chance that graphical parity is achieved in time for release.

And what about a potential port to Switch? If this does eventually happen, it’s likely to either be through a faithful recreation of the original via Virtual Console or a port that vastly enhances the visuals of the original. Until then, however, 3DS users have a classic to look forward to with minimal compromises for the benefit of portable play when Luigi’s Mansion launches later this year.